With the release of Nautilus-Elementary 2.30 I’ve been thinking quite a bit about File Browsers.

Honestly, I’m rather impressed by the overall available functionality contained within Nautilus: Tabbed browsing, Spatial views, tree/list views, as well as many different other possible options available within a vanilla install of Nautilus. Once you tweak Nautilus up, its far easier to get to files and information in Ubuntu than in Windows or OS X.
But are we trained for failure when it comes to file browsing?

More than just in terms of GUI and looks, I would think that the very basic paradigm of file browsing is less than usable.

Lets look at a couple screenshots: 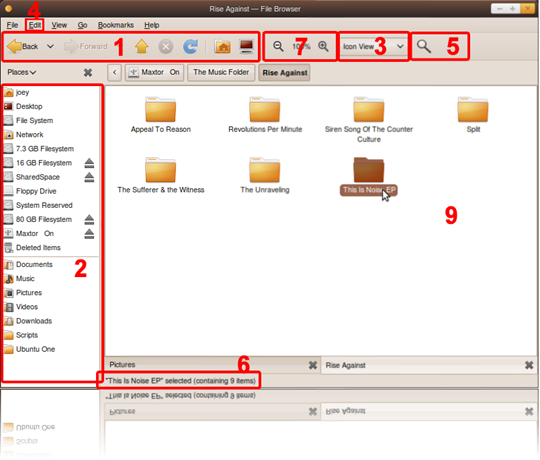 Here’s an example of a basically vanilla install of Nautilus.

Now, it could be easy to tear apart the basic grossness of what’s happening here (I circled in red all of the primary controls, and in case you didn’t notice, their ridiculously off-balanced and crammed together) but rather than look at just where the buttons are, I want to look at how we actually use this thing.

So here we are in the Home Folder. Which is a folder just like any other folder. So, why is it even a folder? I mean, in this screen shot we see a bunch of other folders. Are these things ‘home’ type things? To a new user, are they supposed to understand that this is meant as a directory to different areas of storing documents? Or are we supposed to stick random things inside of Home?

Here’s how Nautilus looks to me, thanks to Nautilus-Elementary and a modded breadcrumb trail thanks to Gnaag:

What have I gained?

To answer that realistically: not much. Mostly I’ve lost things. I’ve lost the duplicity of links, the confusion of buttons dedicated to computer and to home and ups and lefts and rights that confuse more than help.

But all this has done, really, is pare down what is still there. We still end up with a basically confusing mess to anyone who has not used a computer before. All sorts of things show up, with a completely unclear hierarchy of importance. Home, Desktop, File System, Network, Trash, and any other hard drive partitions or connected drives get the same treatment.

Even when switched over to a tree-view mode on the sidebar, we see Home, File System, and connected drives and other partitions as equal.

Well, here’s what. I simply do not think that average users need to see all of these things, at the same time, with a completely confusing hierarchy (connected drives are in the sidebar, but also on the desktop, which is in the same hierarchy).

No really, so what?

When it comes to actual file browsing, we need to change what users see, so that your average everyday user is not so blown away by what they see. While the actual file structure itself may not need to disappear, I think that the way we interact with it must absolutely change. First of all, we need to change the idea of Home (or home folder, or the name of the user, or one of the other names available).

When I go to my Home, the options presented to me should all be equal in importance, and I should need access to them on the same level. Otherwise, its not my home. I don’t think that the Home folder should be presented as a folder at all. Not that you can’t get to is when you need it: just that we shouldn’t have a folder full of other folders. We should have a Home.

1. What might this look like? Honestly, I think buttons similar to what we have in the Software centre would suit this well. We could have a simple grid pattern with the different available categories, (which could, of course, be added to at need. dropbox, ebooks, or any other new categories should be add-able) which would be single click options. In addition, a bottom row of most recent documents could be beneficial as well.

2. Remove desktop from Home. I know! how horrible would that be? Some have actually suggested making the desktop the home directory itself. But in my opinion?

The desktop should not be considered contained by the home directory, because when I have nautilus open to home, hovering above my desktop, it makes no sense to a new user to think that what is in the window over the desktop, contains the desktop. Neither does it make sense to think that the desktop being home is the same as nautilus, over the top. Honestly, I don’t know the best place to put the desktop, but I do know that it confuses beginner users and moms and dads and what not.

3. I think we should add a directory called ‘projects, which would essentially contain a list of names of projects, with documents not moved within, but tagged within. This is another thing that I do not know, technically speaking, how to actually do it in code. While this overlaps some with work in Zeitgeist, I think that its a better representation of what users really need, rather than just a documents folder, than a different directory for pictures. What if my project has both pictures, documents, and video clips involved in it? I want to store these each in their namesake directories, but they’re all related to a particular project. Should I make a copy?

I, for one, find myself creating numerous directories within documents for school, or work, or blog projects, and then copying over the things that need to be there. This creates clutter, and an unnecessary emphasis on the Documents folder, as the things contained within it spread out as being more than documents. Rather, I think we ought to have the first click-able icon in our ‘software-centre-style’ Home be a projects button, which leads us to this tag-able database.

Clean up the sidebar

We need either a home on the sidebar, or a home button in the toolbar, not both. If we have the form of Home that I’ve described, then I don’t think we need the sidebar, I think we need the button, because that gives the indication that its not just a part of a folder hierarchy, but a real place, important to the user and the things I’m going to use.

Another option? Clearing away ‘File System.’ How often does the basic user need this? How unfriendly is that to a user? Instead, the baseboard ‘Computer’ is a catchall for hard drives, disks, and hard drives, and makes much more sense to use as an access point, but again, does not need to always be in the users eye. Put it away, and those of us who need it, can bookmark it. But my mom doesn’t need it, my dad doesn’t need it, heck, I don’t even need it %90 of the time, so I don’t need it visible, making it more difficult for me to click on what I do need. I think the same makes sense for Network, as I really don’t need to see this until the few times I do, and those who do need it ought to be able to add it back. But your normal user? The Human Beings that Ubuntu is supposed to be for? They don’t need to see it.

So what do we need in File Browsers in Ubuntu?

More of my files, less browsing. More things that make sense, less strange, confusing paradigms that new users won’t be able to understand for the life of them.

Hate my ideas? Love my ideas? Let us know in the comments! I haven’t thought of every circumstance, and I don’t think I know everything! Let us know why you think these ideas are good, bad, or ugly.