With 7Digital powering the forthcoming UbuntuOne Music Store thoughts will invariably turn to pricing. How much will a track cost? What about an album? Is it cheaper than iTunes? I take a little stroll through the international shopping mall of MP3’s…

First off these prices are not set in stone and aside from the usual promotions, sales and offers that happen Canonical may have agreed some different pricing strategy with regards to the UbuntuOne Music Store (Highly unlikely, but it’s worth keeping in mind before getting too agitated with prices).

UK citizens can expect to pay around 79p for a single track and around £7.99 for an entire album.

These prices, when compared with iTunes UK, are relatively competitive – most of the time being equal to iTunes although higher than AmazonMP3 charge. 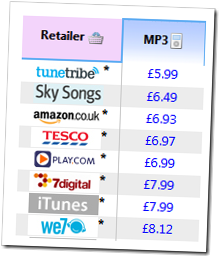 Canadians will find themselves punting C$9.99 in the direction of 7Digital for an album and only C$0.77 per track. iTunes Canada charges C$0.99 per track and around C$9.99 per album.

Prices may fluctuate between different Eurozone countries due to taxes or additional costs applicable with certain countries. Prices taken from the German store front level around 75c per track and full albums look to drain your account of around €8,99.

Over to Sweden now where 14.00 SEK is the average cost of a single track and 95.00 SEK is the going rate for most albums in the Swedish 7Digital store.

Albums give a good slice of pie for your Kroner compared to average physical disc prices (around 149.00 SEK) and the MP3 competition (around 99.00 SEK per album). Single track prices on 7Digital show less of an incentive to purchase – CDON.Se sell single tracks for only 9.90 SEK…

and iTunes sell them as low as only 9SEK a piece!

Over-all from my little window-shopping trip it seems 7Digital are – for the most part – excellent value when compared to the dominant boys (iTunes, etc). They still don’t beat AmazonMP3, in my territory at least, but the convenience of Rhythmbox and UbuntuOne integration will likely offset the pennies in difference between them.

Check out your 7Digital store (if available) via the links below:

Will 7Digital’s pricing tempt you?

Next Ubuntu Developer Summit to be held in Belgium
Read Next