The third and final Alpha of the Ubuntu 10.04 ‘Lucid Lynx’ development cycle has been released — but what changes can you expect to find inside?

Although the music store is scheduled to land in Alpha 3 most signs point to it being kept under-wraps for a few more days.

Factor this in with the postponed “big” announcement which would have likely touched upon the Canonical/7Digital partnership and all roads lead to ‘not yet’-ville.

Pretty much everyone should now see a Plymouth powered boot screen during boot up as the open-source Nouveau driver has now been included – and enabled – by default for Nvidia users. ATi and Intel users already have KMS support.

Note: Nouveau does not support 3D effects so installing the official NVidia driver is recommended. You will still be able see Plymouth during boot up thanks to the vgafb16 module

Talking of boot you’ll, once again, notice big improvements to the duration of booting and shutting down thanks to the on-going work of the Ubuntu Foundations team.

If Alpha 3 is your first hop aboard the Lucid train then you’ll notice a stack of improvements to the Software Centre including PPA views and a new ‘Featured’ category. 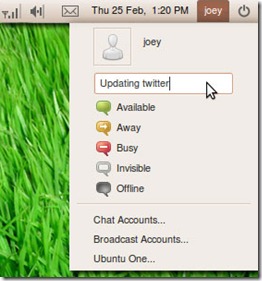 The biggest changes come in the notification area. In the ‘MeMenu’ you now find a text entry box to allow you to update your Twitter account with needing to open an application.

Your Empathy status is also set from here via the new funky icons.

The messaging menu now has icons and no descriptions, making it far easier to use. We discussed that in a little more detail in this post.

Default social networking application ‘Gwibber’ has gone all Tweetdeck since the previous Alpha release, now supporting multiple, configurable panes and some awesome UI improvements. Certainly one of the highlights of Alpha 3.

All the latest bug fixes, security updates, application revisions and kernel updates are present in Alpha 3.

You can download Ubuntu 10.04 Alpha 3 @ ubuntu.com/testing/lucid/alpha3 If you’re currently using Alpha 2 and have installed all updates then you as good as have Alpha 3