It may have a name like an exotic fruit but Guayadeque music player is a surprisingly powerful new addition to the Linux music player scene. Light on resources and heavy on features it’s well worth checking out if you’ve yet to find “the one” music player that services your needs.

Below is a quick over-view of my tinker with Guayadeque.

The musical landscape
If you use a music player in Ubuntu chances are you fall into one of three camps – Team Rhythmbox, Banshee Brigade or Go! Amarok. They’re certainly the three most developed, most widely used and, in most users opinion, the most useable.

Several ‘minor’ music players are also popular choices – the utterly nerd-tastic MPD, “GTK Amarok” Exaile and Listen Music player. All tend to have the same features, albeit with different interfaces: –

Some of the players mentioned above won’t have some of these but most do. They’re the “de facto” standard for a music player.

With so many music players all offering the same features and only so many ways you can arrange browsing panes what does Guayadeque bring to the table?

Guayadeque Features
The official blurb for Guayadeque paints it like so: –

“Music Player with the aims to be intuitive, easy to use and fast even for huge music collections.”

Sounds promising so far. Banshee especially struggles on an obese buffet of music and Rhythmbox can choke during ‘Library watching’ if your collection is suitably impressive.

Nothing beyond ‘Labels‘ is uniquely exclusive to Guayadeque but still presents a nice feature line up.

Interface
First impressions are that the interface is very busy. If there is potential for a pane it’s there! I do prefer the relative minimalism of Banshee/Rhythmbox but for users who want to browse via specifics it’s useful. 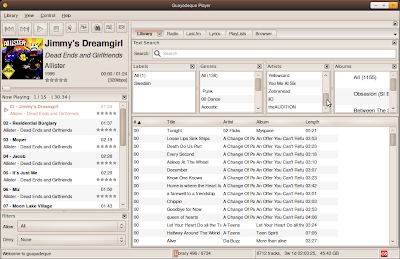 Adding my collection to the player took a while. Far longer than with Rhythmbox of Banshee. but once all my tracks were factored in and loaded up the player looked much more exciting.

Having never used the ‘Genre’ tag, like, ever I ditched this straight away. That’s a great thing about Guayadeque: pretty much every pane can be dragged around or removed. Awesome! 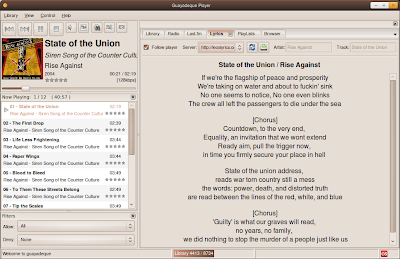 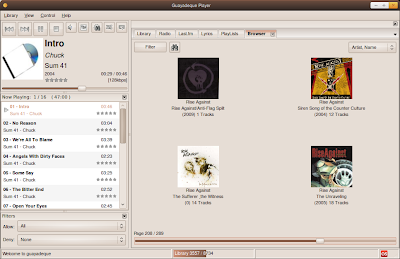 The Last.FM tab is interesting but much better implemented in Rhythmbox. Lyrics, again, are better implemented elsewhere and to most will be a superfluous addition. I do love the fact you can hit the ‘save’ button when Lyrics load for them to be saved to the track meta-data.

Auto-playlist
One feature that screams “I love Guayadeque” is the smart play load that loads similar tracks based on what you’re currently playing. Whilst this feature can be added to Banshee and Rhythmbox through plug-ins, having it built right in gives Guayadeque a scent of win.

Resources
Without getting too scientific about it, a real world test on my PC showed: –

These stats are great if you’re tight on memory but negligible if you’re using anything above 1GB. Afterall, RAM is there to be used.

Final Thoughts
The whole application does make great use of artwork throughout the various tabs and panes – a feature i liked a lot. It makes Rhythmbox look ‘blank’ in comparison.

Guayadeque is a great player so far and one i’ll be keeping an eye on. I can’t say it beats Rhythmbox or Banshee for me just yet but it’s certainly one that is unique and light enough to warrant coming in a very decent 4th behind the “big” three…

Download Guayadeque
0.2.5 (reviewed version) can be installed via the following PPA but note the packages have currently failed to build.

Cutting Edge PPA
A PPA with the SVN build (i.e. more up-to-date but potentially more buggy – thanks anonbeat!) can be installed using: –

Alternatively you can download a .deb for the previous release 0.2.3 (not reviewed version so missing some features) @ http://sourceforge.net/projects/guayadeque/