The Midori team today announced the release of version 0.2.0 of the webkit based web browser. 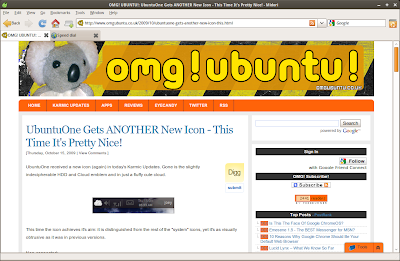 This latest release see’s a ton of improvements made to the once notoriously crash-happy browser. These include: –

Midori Who?
Midori, along with Gnome’s Epiphany, are the oft-forgotten choices for web browsing. They may not have equivalent features for every add-on, bolt-on, power up and super charge that the “big boys” have, but they are both capable browsers in their own right.

Midori, in particular, has several features people probably don’t know about – such as the in-built adblocker, userscripts and userstyles support, the new tab speed-dial…

Thoughts
Before Chrome came along for Ubuntu, i used to use Midori as my default browser as trying to quickly see something when sent a link or wanting to grab a fact from Wikipedia involved an incredibly lengthy wait as Firefox slowly whirred it’s gears into action and attempted to start up. Midori opens in an instant.

My biggest peeve with Midori is now solved. I’m not ashamed to admit it was a minor issue, but it annoyed the hell of me nonetheless and that was the lack of support for anything other than an favicon.ico format. Not seeing favicons for popular websites in tabs drove me bananas!

Having not used Midori for a while and coming to this 0.2.0 release i have to admit I am stunned at how stable it has become. I used to experience at least one crash per session if not more back in version 0.1.0, but 0.2.0 feels very, very robust – something you could happily type a lengthy e-mail in without worrying if you’d have chance to hit ‘Send’ before it kaputted on you.

My advice to anyone out there rolling their eyes at Midori is to try it. It’s a tight, compact, robust little browser perfect for users who used want the web (with no adverts!) and want it without bells and whistles.

Download
You can install Midori from the PPA below either by adding it or manually downloading the .deb file.
PPA: https://launchpad.net/~midori/+archive/ppa

You can get the source from the official Midori site @ http://www.twotoasts.de/index.php?/pages/midori_summary.html

icywind Have in mind that it's not an official statement of…
Do Ubuntu’s Downstream Changes Make a Separate GNOME OS More Likely?

Stetson Snead On the one hand, I understand his argument. On the…
Do Ubuntu’s Downstream Changes Make a Separate GNOME OS More Likely?