The Chrome browser continues to take steps forward to an official Google-sanctioned release. Although the latest Linux updates for Chromium are not as drastic as the previous major update, small incremental steps are being implemented daily and it’s really fascinating to watch the browser mature from a button-less window that couldn’t render much to what it currently is ” an increasingly stable pre-alpha webkit browser that looks and feels native to the Linux desktop.

On with the updates!

Chromium is updated daily ” and there’s always something new to notice aside from the ‘under-the-hood’ developments.

Over the last week the most noticeable of these have been the bookmarks bar, the so called ‘smart/awesome bar’ and we finally have some menu’s!

Bookmarked sites still default to the bookmarks bar but now display favicons and the bookmarks can be dragged around and re-ordered. 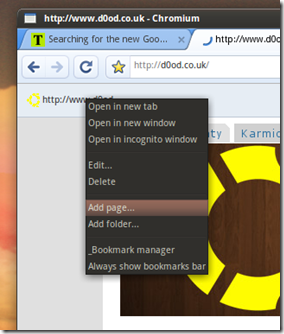 Right clicking a bookmark now brings up a menu. Not all of the options presented are yet available, however ‘open in new tab/window/incognito’ all work, as does ‘delete’ and ‘always show the bookmarks bar’.

Typing the location bar presents an improved ‘drop down’ guide ” complete with informative icons that differentiate between a web result (Globe), a search result (Magnifying Glass) or a history result (Clock). This feature is not in the Windows version of Chrome (as of dev build 2.174.0). 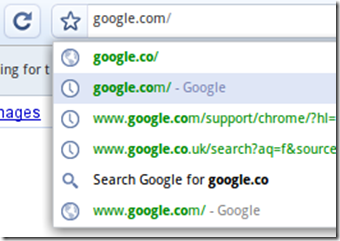 Other small rendering fixes, speed increases and better stability round out this weeks Chrome updates.

You can now easily follow Chromium/Chrome’s progress on Linux by subscribing to the RSS feed of this blog and never missing an update!

What’s RSS? Want to know how to use RSS feeds? Follow my guide:

Stetson Snead On the one hand, I understand his argument. On the…
Do Ubuntu’s Downstream Changes Make a Separate GNOME OS More Likely?

Abhijeet +1 for this. They don't need to become a full-fledged…
Do Ubuntu’s Downstream Changes Make a Separate GNOME OS More Likely?