You Can Help Test the New Ubuntu Software Center

Ubuntu 16.04 LTS will replace the Ubuntu Software Center with a new app store built by GNOME. Users are being invited to help test the new store.

Ubuntu Software Centre To Be Replaced in 16.04 LTS

The Ubuntu Software Centre is to be replaced in Ubuntu 16.04 LTS. 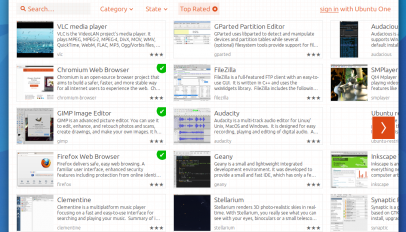 The Ubuntu Software Center has made finding, buying and managing apps easier — but AppGrid offers a faster, sleeker experience to users.

One of the many criticisms that the Ubuntu Software Centre has come under since its launch is how difficult it's been to get paid, commercial applications submitted for inclusion in the Paid Apps section. Ever since we released Volley Brawl a couple of months ago, I've had numerous emails from publishers and developers asking me "how on earth did you do that?! We've been trying to contact Canonical for months now to get [game] into the Software Center to no avail." Thankfully it's a problem Canonical are all to aware of, so they've been working on a Developer Portal similar to that of the Android Market or iOS App Store. Developers or publishers can submit their app, add a title, description, price, category and more.

Joe Sneddon It should redirect to the appropriate Discourse page if you…
First Point Release of Ubuntu 22.04 LTS is Available to Download
250k 151k 59k 3.3k