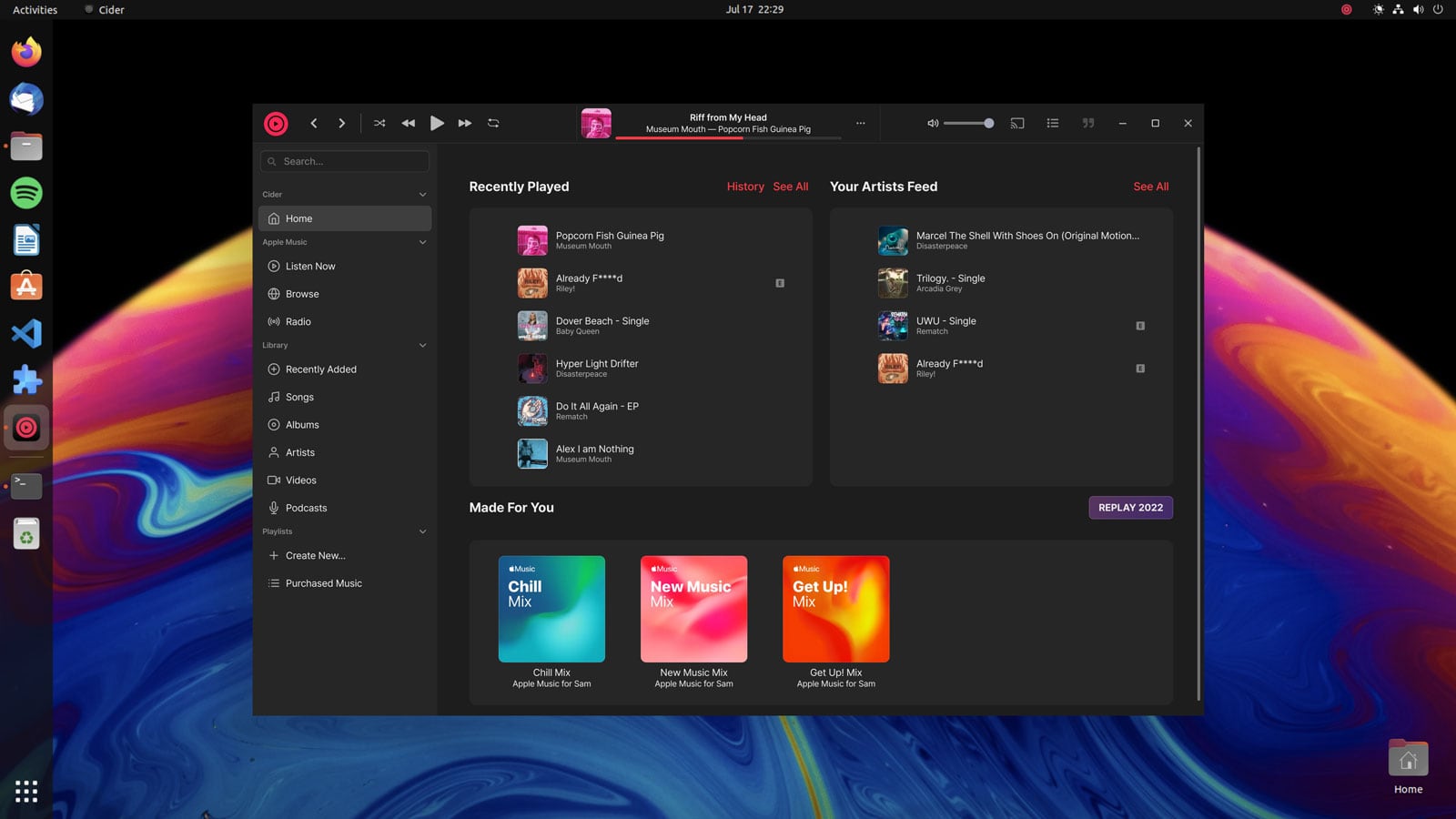 If you’re an Apple Music subscriber wanting to use the service on Linux, you have to check out Cider.

Cider (inspired name, eh?) is an “open-source, community-oriented Apple Music client” for Windows, macOS (not that they need it), and Linux. It is Electron-based but the developers behind it say it was written ‘from scratch with performance in mind’.

As well as letting you browse songs, artists, and albums in the Apple Music catalog the app also gives you access to Apple Podcasts too.

Obviously Cider is 100% unofficial and not Apple-endorsed. But the feature set is solid, and the UI looks great. It gives you all the core functionality of Apple’s own browser-based Apple Music web player with the added convenience of app-specific tailoring.

Cider’s developers are keen to stress that their client is not simply a modded version of the Apple Music web player but an experience of itself, crafted from the bottom up to be its own thing. To this end, Cider offers support for spatial audio via the Cider Audio Lab, and provides an equalizer with plenty of presets to choose from.

The app is also eminently customisable. You can browse and apply custom themes (or even create you own); set an accent colour; enable/disable the fancy window effects; switch between two UI layouts; turn on a compact mode; control what appears in the sidebar; and enable a native window title bar (though honestly, that looks a bit meh so I don’t show it in this screenshots).

Cider also boasts the usual niceties you’d expect of a Linux music client like MPRIS support so you can control music from most Linux DEs sound applets, a tray presence, and track change notifications.

Discord and LastFM integration is baked in so that you can relay or log your music listening habits, and a companion app for Android lets you control playback from your phone.

You can also can shrink the app down to a mini-player, or expand it out to a gorgeous immersive full-screen view with lyrics from Musixmatch:

Cider is open source software that’s free to use but you DO need an active Apple Music subscription to actually use it as intended (though the app is also able play local music files).

Cider is available in nearly every packaging format possible, including .deb, .appimage, or .snap from the project GitHub. It’s also available to install it via the AUR or from Flathub.

If you’re on Windows you can install Cider from the Microsoft Store, download it using Winget, or grab an installer from the GitHub project page.