Being ill for much of the last week or two I missed a few last-minute additions to GNOME 42 as it readied its formal beta build — but belated or not, I want to spotlight one of these changes in particular.

Brace yourself: this is quite a “minor” tweak, and not one most blogs would be rushing to write a post about!

But in GNOME 42 switching between the (all-new) light and dark preference in the Settings app makes the entire desktop, windows, widgets, and wallpaper, gracefully transition between states. There’s no blink, hiccup, or stutter but a smooth, seamless fade.

And it looks classy as heck:

Will this wonderfully bit of whimsy woo anyone weirded out by non-Windows systems? On its own it won’t.

But as frivolous as this fluid flourish may seem, I reckon it bolsters the GNOME desktop’s modern credentials a fair bit. Even if not everyone appreciates it, this kind of attentive detailing helps to imbue the whole system with the feeling it moves as a cohesive, lithe whole.

And that kind of intangible reassurance often goes a long way with certain kinds of users.

Plus, it just looks good, innit 😎. 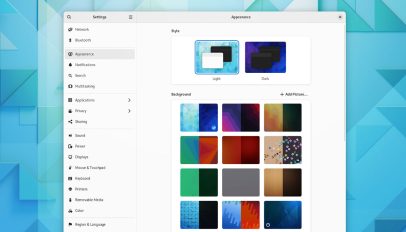