Do you want the aesthetics of i3-gaps but without the i3 bit? If so, that’s exactly what the wryly titled ‘Useless Gaps’ GNOME extension gives you.

The dev says of their creation that it adds “useless gaps around tiled and maximized windows”. This is similar to the sort of look you get with a tiling-window manager (like i3-gaps, AwesomeWM, etc), but inside of GNOME Shell.

The ‘Useless Gaps’ extension is designed for GNOME 40 and up. It will work on older versions of GNOME Shell (I used it on Ubuntu 20.04 LTS) but, as is the case with many modern extensions, you’re unable to access its settings window (from which you can adjust the size of the gaps).

Keeping in mind that this extension has the word ‘useless’ in its name, is it actually of use to anyone?

Most folks on GNOME Shell who want gaps between their snapped windows will almost certainly want better windows tiling than GNOME Shell offers out of the box (which is half screen snapping, nothing more). In these instances a GNOME extension like WinTile or Tiling Assistant is the better option – the latter even has configurable ‘gaps’ built-in.

That said, on super-duper sized displays where regular half-screen snapping is useful, I can appreciate being able to add some offset might be desired, which is what this extension does.

You can install Unless Gaps from the GNOME extensions website. 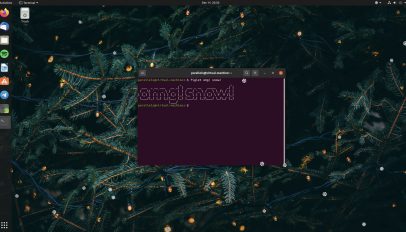