A few folks were worried GNOME 40 might not feature all in the upcoming release (Ubuntu chose to skip it in the last one). Thankfully today’s batch of impish updates ally those fears completely.

GNOME 40 has been covered extensively on this blog (and on plenty of others) so if you’re not familiar with it I have to wonder where you’ve been! 😉 The key thing to know is that GNOME 40 introduces a new layout and several new behaviours.

For instance, when you login to Ubuntu 21.10 you’re now greeted by a new ‘overview’. This, as in upstream GNOME 40, is designed to orientate you to the ‘new’ way of working:

GNOME 40 also introduces horizontal workspaces, mini-workspace thumbnails (which are interactive), a new horizontal-scrolling app launcher, and a top bar that vanishes when the overview or app launcher is active.

All of these changes are designed around a dock at the bottom of the screen.

In the currently daily builds Ubuntu 21.10 places the Ubuntu Dock on the left hand side. They haven’t moved the dock to the bottom, or reverted to using GNOME’s native dock. And as far as I know there are no plans to do that, either.

Does having a left-aligned launcher work with the horizontal paging elements introduced in GNOME 40?

There are some obvious visual inconsistencies that need to be ironed out (I hope, anyway). Workspaces don’t have drop shadows, workspace mime types in the overview aren’t rounded, and the “top bar” should probably be the same colour as the Ubuntu Dock (and when the top bar turns invisible in the overview it makes the dock look cut off).

I do think that adding a bottom margin to the bottom of the workspaces might help “balance” the overview, like in this (admittedly hasty) mockup:

Still, there are severals months of dedicated development to go, and we remain a long way from UI freeze. As such, nothing you see today is final. Expect more changes in the coming weeks, which we’ll naturally be covering here, on the blog, as soon as we spot them! 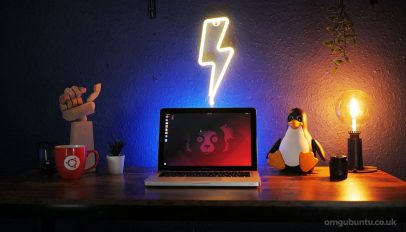 Ubuntu 21.10 Released, This is What’s New
Read Next