Mozilla Firefox 90 is now available to download for Windows, macOS, and Linux.

Since last month’s Firefox 89 release was a substantial one you won’t be surprised to know Firefox 90 is a more modest affair. The biggest feature addition is background updating for Windows users (it allows the browser to be updated even when it’s not running).

The new, if not-universally-loved ‘Proton’ redesign remains almost identical to the last version. Mozilla’s dev task force don’t appear to have made any significant changes based on its initial reception. Firefox 90 does not (in the version I tested) remove or retire any of the flags users can change to disable Proton entirely (or tame its excesses).

A miscellaneous goody (unless you’re Mark Zuckerberg) is that Firefox’s SmartBlock feature now blocks third-party Facebook scripts in private browsing mode (unless you login from a private windows, of course).

A major feature removal of note: FTP. Mozilla has been upfront about its plans to remove FTP support from Firefox. And in Firefox 90, those warnings come good as FTP support is gone entirely. No hidden flags, no workarounds; gone. Possible salve: web extensions can register themselves as FTP protocol handlers, Mozilla say.

Mozilla rounds Firefox 90 out with a glut of security fixes, performance improvements, and a small (but welcome) behaviour change: the “Open Image in New Tab” action now opens in a background tab.

If you run Ubuntu (any supported version) or a distro based on Ubuntu you will get an update to Firefox 90 in the coming days, though you can go out and download a copy manually from the Mozilla FTP (I know), or from July 13th via the official Firefox website. 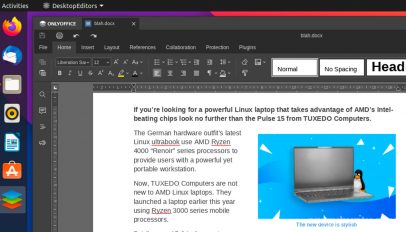 OnlyOffice 6.3 Released, This is What’s New
Read Next