For the past 10 years GNOME shell has been based around a single panel stripped across the top of user’s screens — but is this fundamental feature about to change?

Well, to quell whatever dim intrigue I just stirred: no, it’s not. However, GNOME designer Tobias Bernard, a key architect of the well-received GNOME 40 release, is playing around with a concept in which —get this— GNOME’s famous top bar is moved to the bottom of the screen.

Kind of crazy, huh? It’d be the most major ‘major’ design change made to GNOME Shell since it debuted. After all, the top bar is an anchor in the GNOME Shell experience. It’s where the status menu, notification center, clock/calendar applet, app menu, and oh-so-important Activities button all sit.

Or should that be ‘sat’, if this mockup were made real:

Now, before anyone gets too excited (or too angry — this is the internet after all) at the idea of a top bar becoming a bottom bar I must stress that that is all this is: an idea.

Absolutely nothing you see here is is finished, finalised, or for definite. Mockups are not indicative of anything other than someone, someplace, turning ideas in their head into ideas on a screen.

In the bottom-bar universe the form and fit of other key GNOME Shell elements changes. Drop down menus work when they have something to drop down from, but without? Well, a different approach is taken.

Tobias reimagines GNOME Shell’s Status Menu as something more akin to a Status Hub, replete with ChromeOS style quick toggles, integrated notifications, and ample radii on pretty much everything!

After so many years of seeing GNOME Shell from the top-down it feels rather odd to gawk at it the other way around. I imagine those used to a Windows environment, or a similarly-structured open source desktop environment, will look at the mockup above and think “yes, that looks right”

You’ll notice in the two screenshots so far — you can view the full mockup on Gitlab — that there is no app launcher icon or ‘Activities’ button on show.

Instead the “•••” icon bottom center is prodded on to pull up a rather more familiar screen: the workspace switcher — or ‘activities overview’, if you prefer.

You’ll notice that the “•••” icon (again, bottom center) gains an extra row of dots. A second click (or swipe up) here takes us to this page of the mockup which, again, should be familiar if you’ve tried GNOME 40:

Tobias says the mockups try to address ‘a number of issues from user research and feedback to GNOME 40, namely:

The approach explored in these mockups is to move the top bar to the bottom, drop the ‘app menu’ (what’s left of it 😅), and put the overlooked Activities trigger literally front and center.

The mockups do introduce a few dilemmas of its own that would need to be solved should this ideation come to fruition. Not least of which is what the heck is the clock doing!? 😅 It feels so unintuitive to see it on the left!

Whether you love or loath what’s presented in these mockup it’s reassuring to see that the hands that help make it — contrary to popular opinion — are open to exploring major changes to their existing layout.

GNOME Shell, even in this model, is still built heavily around the concept of workspaces. When you don’t need to see an app for a while? You switch workspace. Want to switch to a different app? Open it on a different workspace. There’s no minimise button and no on-screen task switcher (aka dock) by default.

As I’m not a user interaction specialist I can’t tell you if the ideas (as presented) are an objectively better approach than what is currently coded, but I find them interesting all the same.

Plus, if GNOME 40’s “horizontal workspace” revamp can get from mockup to release in one development cycle, who’s to say this “bottom bar” rejig can’t too? 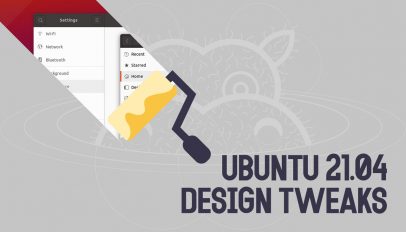 Have You Noticed These Design Tweaks in Ubuntu 21.04?
Read Next