The developer who brought Linux to the PS4 has a new target in his sights: Linux on Apple Silicon.

Apple recently switched to using its own ARM-based processors gives Mac computers, giving them an unassailable lead over current Intel-based chips. But the switch also thrusts a stick in the spokes of other operating systems that have, traditionally, been able to run Apple hardware.

And that includes Linux.

On the software side there are (already) fruitful efforts to port Windows 10, Docker, and other virtualisation software to run on Apple M1 chips (and some x86 code is said to run faster via emulation on Apple’s M1 processor than it does natively on Intel chips).

Bringing up Linux support for Apple’s M1 chips won’t be an easy overnight task, but it’s a task that developer Hector Martin is willing to take on. He’s launched a fundraising campaign on Patreon to help support his work on a Linux port to Apple silicon.

Martin writes: “Apple just released a new range of ARM-based Apple Silicon Macs that blow every other ARM machine in the same class out of the water. Wouldn’t it be nice if they could run Linux too?”

“As it turns out, they can, but someone needs to do the work. Since these devices are brand new and bespoke silicon, porting Linux to run on them is a huge undertaking. Well beyond a hobby project, it is a full-time job,” he explains.

His (current) goal is to net $4,000 a month. This a figure, Martin reasons, is enough to adequately fund the full-time effort required to create more “…an OS you would want to use on a daily driver device”.

Linus Torvalds, creator of Linux, recently shared his thoughts on Apple silicon. While interested, he was hesitant to get too excited: “The main problem with the M1 for me is the GPU and other devices around it because that’s likely what would hold me off using it because it wouldn’t have any Linux support unless Apple opens up.”

Hector Martin is more optimistic than Linus — and he has reason to be: he’s really good at porting Linux to stuff, even when it involves reverse engineering, creating complex workarounds, or writing Linux drivers from scratch.

It’s possible to run Linux on the Sony PlayStation 4 (with 3D acceleration, no less) and the Nintendo Switch because of his efforts.

“Running Linux on things is easy, but making it work well is hard. Drivers need to be written for all devices. The driver for the completely custom Apple GPU is the most complicated component, which is necessary to have a good desktop experience.”

If you’re keen to see Linux ride on Apple’s new tech wave you can contribute to his Patreon project. Pledges start from as little as $3 a month.

Home » News » Linux Support for Apple Silicon? This Dev is Working on it 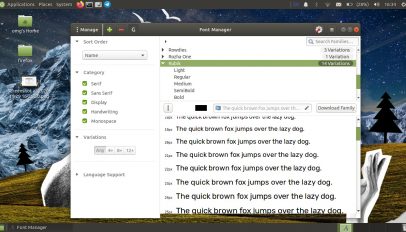