Smartphones that flip, fold, or bend like a well-oiled Yoga teacher are all the rage these days, but their novelty often lacks a real purpose — not so with Fxtec’s Pro1-X, which launches on IndieGoGo today.

Sat behind this phone’s high-res 5.9-inch AMOLED screen is a slide-out 64-key QWERTY keyboard (backlit, naturally) and designed for use when the phone is landscape mode (for those sweet, sweet Nokia N900 vibes).

Fxtec —styled as “F(x)tec”— launched its mid-range Pro1 Android handset last year, preloaded with a fairly vanilla Android experience. Now the company is back with an improved version of the Pro1-X that boasts better specs and a choice of operating system.

Lineage OS is the headline OS — and for good reason.

The Fxtec Pro1-X is the first consumer device to be sold with this open-source friendly Android flavour available “out-of-the-box”. Lineage OS receives monthly OS, software, and security updates too (more than can be said for most Android phone).

Buyers aren’t limited to Lineage OS either as the Fxtec Pro1-X also runs Ubuntu Touch. We’re talking out of the box support here; you don’t have to download and flash Ubuntu Touch yourself or boot it from an SD card. It’s inside. On the device. Where you want it.

The Pro1-X is based around an octa-core Snapdragon 835 SoC (the same chipset used in last year’s Pro1 model). This chip, first released in 2016, is still a competent and competitive performer in 2020, especially when viewed against many other mid-range handsets.

From what I can tell the Ubuntu Touch experience doesn’t seem to have been “enhanced” or added to for this debut, but convergence is available through the USB C port. Fxtec say “[users can] plug the Ubuntu Touch-powered F(x)tec Pro1-X into a monitor and they’ll get the full Ubuntu Desktop experience”.

Don’t get too excited by that. While Ubuntu Touch does indeed have a desktop guise it’s not the Ubuntu desktop experience as most will expect it (and it doesn’t work in entirely the same way either due to its read-only file-system) so keep this in mind before backing on that basis.

“After the fantastic feedback we received from users of the Pro1, we’re excited to partner with XDA to offer our customers choice of an alternative OS out of the box; a pure smartphone experience with Lineage or a truly open linux OS with Ubuntu Touch,” Fxtec’s Adrian Li Mow Ching says.

The Fxtec Pro1-X launches on IndieGoGo today. The phone will have a $829 asking price, but early backers can pledge snag a handset from $499.

Generally speaking I’m hesitant to cover crowdfunding projects here on omg! ubuntu! because they often promise too much and deliver too little — if anything. But Fxtec isn’t a novice here; it’s a UK-based start-up that has successfully brought a phone to market before. One to watch! 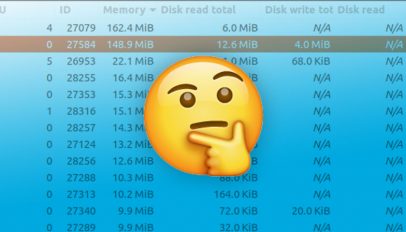 Does the Snap Store Use Too Much Memory?
Read Next