UKUI 3.1 is the next major version of the bespoke Qt-based desktop environment. The update will ship as part of Ubuntu Kylin 20.10 which is due out this October.

For UKUI 3.1 Kylin devs have deftly built on the foundations they laid in the UKUI 3.0 ‘Preview’. That version, which features in Ubuntu Kylin 20.04 LTS, has now been downloaded over 3 million times since April and received more than 500 updates in the past 4 months alone.

But bug fixes, stability improvements, and performance tweaks are something of a given. We all expect those. What you want to know is if there are any visual changes on the way — and I’m pleased to tell you that there are!

You don’t need to have used the UKUI 3.0 desktop to appreciate that it is a striking Linux desktop environment. It boasts the kind of visual “wow factor” more often associated with the Deepin desktop. But prettiness aside it was a DE whose usability was (perhaps not-so-subtly) inspired by Microsoft’s Windows 10 and the ‘fluent’ design language.

Take the Peony file manager. It has undergone some major user interface changes. Changes that see the utility swerve away from its Windows Explorer model and hurtle towards mobile-style one:

The tab bar now sits across the top, while the toolbar and breadcrumb bar sit beneath. To take advantage of the rearrangement there’s a ‘full height’ sidebar that’s not too dissimilar to what’s included in newer versions of macOS — and nods to this particular system are evident elsewhere.

You can see that it is no longer flush to the screen edge. The ‘floating’ taskbar effect riffs on the dock in macOS Big Sur and iPad OS 14. But the changes have some functional benefits too as the task bar can be resized on the fly, and you can drag and drop the taskbar to different screen edges:

Talking of dark mode, support for this eye-pleasing mode is improved throughout the UKUI desktop including the revamped notification/action center:

Putting the “source” of inspiration to one side the set of changes shown above help refine the look and feel of UKUI.

But there’s more to come.

Yes, this was only a small taster of what’s to come in UKUI 3.1. Kylin devs tease that there are bold changes to other parts of the desktop — more of which will be revealed soon.

UKUI is a Qt-based desktop environment developed by the Kylin team. It is installed by default in the Ubuntu Kylin open source operating system (as well as and the Galaxy Kylin commercial release). It’s available to install on other Ubuntu releases too, just be aware that translations are sometimes a little rough and many of the desktop’s Chinese service integrations aren’t available outside of the country.

Let me know what you make of these changes down in the comments!
News ubuntu kylin ukui 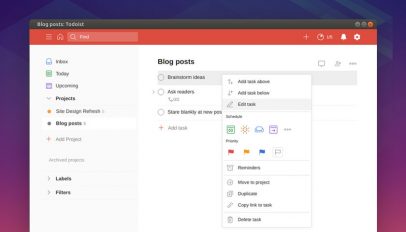 There’s Now an Official Todoist App for Linux
Read Next