Been holding out for word on a new Dell XPS 13 Developer Edition preloaded with Ubuntu 20.04 LTS? Well you’re in in luck as Dell has announced one!

You likely don’t need much in way of introduction to the Dell XPS 13 Developer Edition. This laptop series has, throughout its many incarnations, become as popular with Linux developers as IBM’s famed ThinkPad line (which was recently blessed with Ubuntu too).

The latest iteration of Dell’s developer laptop ships with Ubuntu 20.04 LTS pre-loaded. The device touts a built-in fingerprint reader that “just works” with Ubuntu (and devs are backporting newer fingerprint login improvements) plus a bevvy of other features.

Graphics performance varies depending on the processor you opt for. The i5 config comes with integrated Intel UHD graphics, while the 10th Gen Intel i7 config offers integrated Intel Iris Plus graphics.

The laptop ships with 8GB of LPDDR4x RAM as standard but this can be expanded to 32GB if you want (and yes, you probably do want — this thing runs GNOME Shell after all).

There’s also up to 2TB of storage (M.2 PCIe NVMe Solid State Drive), the aforementioned fingerprint reader, and a battery life which — get this — Dell say is good for up to 18 hours.

Ports-wise the connectivity options are svelte with two Thunderbolt 3 ports for video and power; a regular 3.5mm headphone jack; and a flush microSD card reader. There’s Killer Wi-Fi 6 AX1650 (2 x 2) and Bluetooth 5.1 on board, both “just work” in Ubuntu 20.04.

Style isn’t compromised either. The Dell XPS 13 developer edition is available in a sleek ‘platinum silver with black carbon fiber palmrest‘ or a more refined ‘frost white with alpine white composite fiber palmrest’ (albeit for $50 more).

Pricing for the newly Ubuntu certified model starts at $1,099.99 in the US. Price will vary depending on configuration and locale. 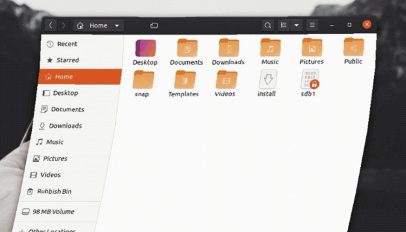 How to Enable Wobbly Windows Effect on Ubuntu 20.04 LTS +
Read Next