The Astro Slide is an Android-based smartphone with sliding physical keyboard currently crowdfunding its way into existence — but with the added lure of Linux support.

Now, i’m generally wary of mentioning anything that is crowdfunded. That goes double when it’s a) technology being hawked on b) the oasis of overpromise that is IndieGoGo.

But Planet Computers, the company angling to animate this ode to early 00s technology, has a track record in this area. Not only have they run successful crowdfunding campaigns before but they’ve also nailed the hard bit: actually shipping products to backers.

Their latest mobile gambit is Astro Slide 5G Transformer (to give it its full, rather unwieldily name). The device is every inch the marriage of early 00s PDAs with modern 10s all-glass phablet frontage.

Which is just as well because that is exactly what this device is: a smartphone-come-personal computer.

“Big enough to be the only device you need to carry, and small enough to fit in your pocket, it’s a true all-in-one replacement for both your mobile phone and your laptop,” say the company behind it.

Smartphones with physical keyboards are still fairly niche, but mechanical, backlit ones hinged to a 6.53-inch touchscreen more so.

When unslid (is that a word?) the Astro Slide resembles a tiny, slim profile laptop with full (if minute) physical keyboard.

So, when you’re done ranting on Reddit (or whatever it is you find you need a proper keyboard on a phone for) you just slide it back in and voila: a regular smartphone again.

The Astro Slide builds on Planet Computers attractive, if flawed, Cosmo Communicator, which has a hinged keyboard rather than a sliding one.

But what is most interesting to me (as a Linux fan) is that Planet Computers talk of the ability to dual-boot Linux distros like Ubuntu on the Astro Slide.

That said, I must stress that the Linux boot capability is just talk right now. There are no demos or no compatibility lists so one assumes it’s not guaranteed to be present at launch either.

And while the Astro Slide ships with Android 10 there won’t be an option to have a Linux OS pre-installed, either on its own or alongside Android 10.

Still, giving the Cosmo Communicator did manages to wangle its way from concept to creation, I’m optimistic about the Astro Slide, especially if the promised Linux support materialises.

Interested in throwing money at the project? You can do so over on IndieGoGo, though the usual CROWDFUNDING DISCLAIMERS APPLY 📣.

You’ll notice that project has already passed its crowdfunding goal (it took less than 4 hours).

Home » News » Is it a Smartphone? Is it a PDA? It’s Both, and It Supports Linux! 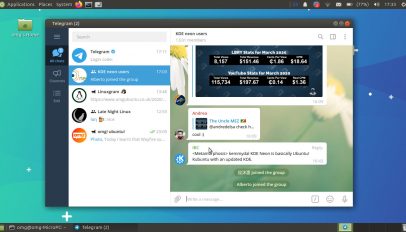