Have you ever wanted to change the GNOME Shell font only to learn you can’t, not without editing a hidden .css file?

If so, GNOME developers have heard you and are finally working on a fix for this overlooked and long-standing issue.

Florian Müllner has contributed the code necessary to make GNOME Shell respect your font settings (which can be configured using the GNOME Tweaks tool).

If approved, his change would mean that the interface font you set here:

…Gets respected and picked up throughout the entire GNOME Shell interface, including the top bar, calendar applet, desktop notifications, panel menus, and both Activities and Applications overviews.

It’s important to stress what this change is about and what it isn’t. It is already possible to change the font used for desktop apps via the Tweaks tool.

The rub is that the “shell” interface doesn’t pick up or use the font set there. Instead it defaults to a hard-coded value locked away in the .css file for the default GNOME Shell theme (though the font can vary by session: Cantarell in vanilla GNOME, Ubuntu font in Ubuntu, Fira Sans in Pop!_OS).

If you want to make the GNOME Shell font match the one used by the rest of the desktop you have two choices at present:

Neither solution is an elegant or user-friendly approach in keeping with the rest of the GNOME Shell user experience.

But Florian Müllner’s patch — not yet final, stable, or guaranteed to make it in to master branch in time for GNOME 3.34 — is a welcome step in the right direction.

You can see a demo of his patch as it currently stands in this video from BabyWogue, starting at 1:11:

Note: I did not make the video above. Please direct any wallpaper/soundtrack/robot voice complaints in Alex’s direction.

Apropos: if you want to see videos made by me subscribe to our YouTube channel as it’ll motivate me to open Kdenlive.

But there are issue that could scupper this effort to bring typeface consistency to the Shell.

GNOME Shell tends to use different font sizes in different parts of the interface. If a user can set a custom font via Tweaks > Fonts > Interface might they also expect it to adhere to the specified font size, too?

We’ll be keeping an eye on this issue over the coming weeks. Hopefully the concerns raised about its implementation can be smoothed over and/or addressed. 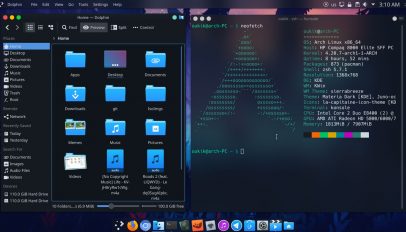 Does Your KDE Plasma Desktop Look This Good?
Read Next