Confession: I haven’t been keeping a very close eye on KDE Plasma development this year — but when I heard they had unveiled a new wallpaper, my interest piqued!

The “content” of the default KDE Plasma desktop wallpaper is, I concede, not super important to most people. But just like Ubuntu’s choice of desktop drag, what’s on the desktop matters: it informs a new user’s “first impressions”.

So picking the right wallpaper is worth taking the time to do.

For Plasma 5.16, the KDE community ran a community wallpaper competition. Participants — literally anyone with Krita (or similar) and some free time — were able to submit original, high-quality wallpapers for consideration. The artist(s) of the winning background snags themselves a nimble Slimbook Linux PC!

The contest was a break from tradition; past default Plasma wallpapers were created by Ken Vermette.

The winning wallpaper was created by graphic artist Santiago Cézar, and is called “Ice Cold” — and you only need to look at the image to know why…

The temperature of the new wallpaper juxtaposes harshly against the warm, seductive (yes, I did just say that) tones of previous drapes, but remains stylistically consistent — which is possibly what helped contribute to its win.

For fun, and for penguin fans, the designer of Ice Cold has also whipped up a separate version featuring a waddle of penguins:

To float the new background in a sea of context (strained analogy, but it’s early in the morning) here’s a gallery of the previous four default Plasma desktop backgrounds:

The new one fits quite well, doesn’t it?

Keep an eye out for the winning (penguin-free) version of ‘Ice Cold’. As Plasma 5.16 nears release it’ll be on show in blog posts, screenshots, YouTube videos and other promotional material.

But don’t think you have to wait until the Plasma 5.16 release to use the new wallpaper on your desktop.

You can download the cool ‘Ice Cold’ wallpaper in super high-resolution via this link.

The background will also be available on any and all Linux distributions which ship Plasma 5.16 (and its wallpaper set) when released in the coming weeks.

Finally, if Ice Cold is a bit too cool for your tastes I recommend having a rummage through the rest of the contest’s submission on the KDE forum. You’ll find some top-notch alternatives available for download. 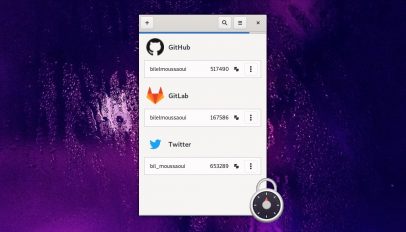 Authenticator, a 2FA Token Generator for Linux, Gets Updated
Read Next