The Pop GTK theme now has a “slim mode”. When enabled, this reduces the heigh of header bars, giving more space over to app content. There’s also an optional ‘dark mode’ for “easier viewing at night”.

Folks who regularly futz up their systems will undoubtedly appreciate the new “Refresh Install” option that’s been added to the “recovery partition” (though this is only included on new installs). Using this rescue mode you can reinstall Pop OS without losing any data in your ~/Home directory or any users you’ve added to the system.

Finally, there are a couple of changes to the (Papirus-based) icon set.

Icons used for Home folders have been adjusted to better compliment the new GNOME icon set. And, following Yaru’s lead, third-party apps no longer have their icons replaced by the system icon theme.

Why? Because it’s rude for an OS to replace third-party app logos when those logos are often part of a brand.

It’s different when a user chooses to do this — it’s their system — but not when an OS vendor does it (who often get protective about their own brand and logo).

Why Use Pop OS? You Shouldn’t (IMO)

If you came here hoping to see me land a KO blow for one side of the Pop OS vs Ubuntu debate, you have my apologies. Best make your way to the ticket booth and ask for a refund.

I rarely venture an opinion on my own site, and sometimes when I do, a bunch of you will chime in to tell me I’m wrong. I don’t mind that; it’s a great way to learn.

But in this instance, for me personally, I don’t see any appreciable value in Pop OS. Certainly nothing that would make me recommend it over regular Ubuntu 19.04 (or over something like Ubuntu MATE 19.04 now that it comes with a glut of GPU niceties onboard).

Pop OS has a nice enough GTK theme and icon set (as most distributions do) and a couple of interesting desktop tools (like a USB flashing tool).

But it also comes cosseted in reams cool marketing speak about “creators”, “automation”, “makers” and other fluff.

Now, maybe if you own one of their rebranded Clevo laptops there’s some substance to the buzzwords. But for, reading it as an outsider, telling me I can use the command line to install Tensorflow is… Like, you know you can do that in Ubuntu, right?!

Indeed, that’s the rub with most of the features touted on the Pop OS website: they are common to virtually every modern Linux distro out there!

Don’t get me wrong: highlighting those capabilities is a great bit of marketing. Ubuntu should do it too. But, as a Linux user, I find it a bit “And?”.

So, erm why not just ship Ubuntu, folks? 😆

Still, opinions opposite to mine are readily available elsewhere online (and given that this little distro is managing to find a vocal following, said opinions are not difficult to find either).

If you run the previous version of Pop OS (based on Ubuntu 18.10) you can upgrade to Pop OS 19.04 using the built-in system update (a quick way to get it to show is to run the do-release-upgrade -c command).

If you do not currently use Pop OS, but you think you would like to, you can download a 64-bit ISO image from the System76 website. Two images are available: one for Intel/AMD and one NVIDIA systems. 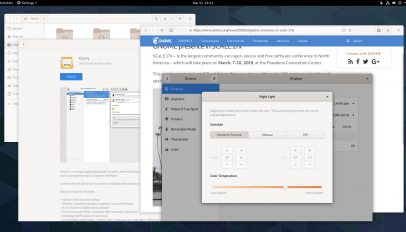 How to Use the Adwaita Theme on Ubuntu (Spoiler: It’s Easy)
Read Next