The chequered flag falls on SuperTuxKart as it speeds into pole position. Yes, SuperTuxKart 1.0 is officially released.

And a notable release it is too: SuperTuxKart 1.0 is the first stable version of the famed open-source racing game to offer online multiplayer functionality.

With this release the FOSS-themed Mario Kart alternative matches its inspiration for real-time competitive online play (but, unlike its inspiration, remains mercifully free of terrible Blue Shells and turgid Rainbow Road).

Not that networked multiplay is totally new. If you’re an avid Super Tux Kart player you might have been making the most of the feature in recent beta and release candidate builds versioned 0.10.

But in honour of the latest release — which STK devs described as “the most significant step forward in SuperTuxKart’s more than 12 years of history” — the version number leaps to 1.0 with this release.

The online play feature in Super Tux Kart 1.0 — and up, in case you’re a time traveller reading this post far in the future — works just like you would expect: you choose online play, pick (or host) a server, and wait to join fellow racers

All of the karts, characters and tracks you love are available in online play too, and you’ll continue to find all the same power-ups available in item boxes.

For the best results it’s advised you try to race with other online players located in the same country or continent as you (depending on which is bigger).

Why? Latency, as the STK devs explain:

“Cross-continent may not work the best; you should try to have a reasonable ping – 100ms works fine, and we had some races with 300ms ping, though unavoidable sudden stuttering and karts jumping around is more frequently at higher latencies.”

A stable connection is also necessary (particularly for those acting as host server), but bandwidth usage is described as “minimal”, even with the maximum 10 players connected.

To create your own server just use the “create server” option. To join a community server just select one from the list.

The old mansion track is supplanted by the new, improved and previously donate-only, Ravenbridge Mansion track in this release, while the Black Forest add-on joins the track roster proper.

You can download SuperTuxKart binary files or source code from the SuperTuxKart Sourceforge page. The game is available to download for Windows, macOS, Android and Linux.

Ubuntu users can install an older version of SuperTuxKart from the repos, but should be aware that the repo build does not include online play.

To upgrade to and install the latest SuperTuxKart release you’ll need to use an alternative install method, like Snap, Flatpak or PPA.

The SuperTuxKart Dev PPA carries the stable 1.0 release for all supported versions of Ubuntu, from far back as 16.04 to the latest Ubuntu 19.04 release:

If you’re Ubuntu-based and itching to play then the PPA is the route I’d recommend.

You can also install SuperTuxKart from Flathub, the Flatpak App Store, and download SuperTuxKart 1.0 as a binary package from the project’s SourceForge page.

The binary build is suitable for both 32-bit and 64-bit Linux distributions.

When fully downloaded, extract, and run the game using the run_game.sh script inside the extracted folder (or give the file permission to run and double-click it).

If you’re on a continually updated Linux distribution like Arch or Manjaro you can may be able to get the latest release direct from your repos or from the AUR.

Available for Android too

If you use an Android smartphone or tablet or run a relatively recent Chromebook, you needn’t miss out on the fun either.

Grab the Android version from the project pages linked above, or install SuperTuxKart directly from Google Play:

Get SuperTuxKart on Google Play 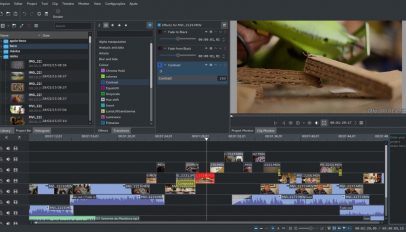