The single biggest issue I have with the Suru icon theme Ubuntu 18.10 debuted with was the lack of consistency.

Shipping an icon set with a uniform shape and glyph style is a bold move, but it’s one that only works when it extends to and covers every app icon on the system.

Alas, Suru did not. Third-party and branded apps were (understandably) left ‘untamed’.

The result? A punctured aesthetic:

But the Yaru design team have pulled their socks well and truly up for the upcoming release of Ubuntu 19.04. They’ve come up with an ingenious way around the “issue” of restyling third-party and branded icons.

And as a result I’m pleased to say that in Ubuntu 19.04 the app grid looks a whole deal more cohesive:

Icons for “branded apps” such as Firefox, Thunderbird and LibreOffice now sport some bespoke ‘Suru’ style icons, and there are additional custom icons for apps previously uncovered, like all of those GNOME games.

But take a close look at some of the ‘new’ icons and you’ll notice they’re not exactly the same as native Suru icons.

Branded and third-party apps which would normally lack a Suru icon are given a pesudo one instead. The native app icon/logo is simply “framed” in a colourful tile.

The trick is due, in part, to an automatic script. Where able, the script extracts colours from the native icon to create a gradient ‘squircle’ tile within which the original, untouched and branded icon is placed.

Automatic though it is, it serves to makes the entire Suru icon theme look far more cohesive.

The effect of the icon script is more noticeable in the following image from the Yaru theme thread, which shows a swathe of third-party app sporting icons generated by the Suru icon script:

Looking much better, no?

It remains to be seen if Ubuntu 19.04 will make that other new icon set in development, i.e. GNOME 3.32’s, available. Like Suru the new GNOME icon set uses a distinct and stylistic approach, giving apps a semi-3D look. 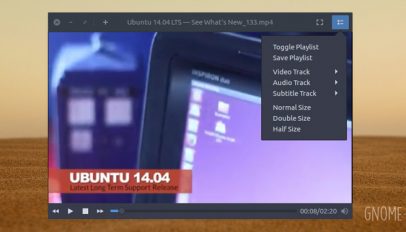 ‘Celluloid’ is the new name of GNOME MPV
Read Next