As you may know Google is bringing Linux apps to Chromebooks — but did you realise that the feature could pave the way for Windows apps, too?

Yup, we’re talking Wine, the Windows software compatibility that is a staple part of the Linux app ecosystem.

Be it for Adobe Photoshop or games like Fortnite and WoW, Wine is the go-to fudge when you need an app that lacks a native Linux equivalent.

So, naturally, folks with access to the Crostini Linux VM in Chrome OS (which is currently limited to the pricey Google Pixelbook) are also having a slosh about with Wine and Windows apps too.

Among them CodeWeavers‘ Josh DuBois.

In what I can only describe as the digital equivalent of a three-bird roast, CodeWeavers, who make the commercial Wine software CrossOver, has demoed a Windows app running through Wine on Linux in Chrome OS.

Re-read that sentence again if you need to, or gawk at the proof:

Now, the whole “Windows apps on Chrome OS via Wine” thing is not new. CodeWeavers released an Android version of their CrossOver software a few years back.

That app, which is still supported, lets anyone with an Intel Chrome OS device and the Google Play store enabled to install and run Windows apps like Steam on a Chromebook.

This could benefit Linux too

While my own enthusiasm for the whole “Linux VM on Chrome OS” malarky is based on being able to run native Linux apps on a Chromebook — Lollypop! Corebird! Gedit! — I’m not numb to the potential upside of having Windows apps too.

There’s an outside change that this could benefit Linux as a whole. Should the VM feature gain traction, and people start using Windows app regularly, it might be the nudge needed to get vendors like Adobe to put effort in to making sure their software plays nicely with Wine.

You can find Josh DuBois thorough guide on how to install ‘Crossover in a Linux VM on the Google Pixelbook’ over on the Codeweavers blog, linked below:

CrossOver in a Linux VM on a Google Pixelbook: Walkthrough 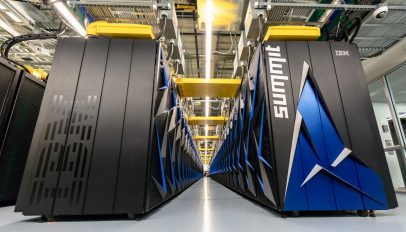 America Unveils the World’s Fastest Supercomputer (And Yes: It Runs Linux)
Read Next