It’s finally here: GIMP 2.10 is available to download for Windows, macOS and Linux.

The latest stable release of this insanely popular open source image editing tool – oft touted as a Photoshop alternative – has been 6 years in development.

Given the long gestation period you won’t be too shocked to hear that GIMP 2.10is jam-packed with changes, improvements and new features, both big and small, visible and non-visible.

To put things into perspective GIMP 2.8 was released back in 2012. Back then Unity was still fairly new, Netbooks were still (just about) a thing, Ubuntu Touch was looking healthy …and I was capable of churning out 8 posts a day, every day.

It’s now 2018. A far different landscape. Does GIMP still have what it takes to not only meet the demands of free software’s image editing enthusiasts, but retain its crown as go-to Photoshop alternative?

One thing is immediately noticeable about the new GIMP 2.10: its appearance. A new dark theme is enabled by default for new installs, and the toolbox makes use of cleaner symbolic icons.

GIMP devs say these changes are designed to help improve concentration. The UI is effectively “dimmed” so that focus is placed on squarely on the content being worked on.

GIMP is not alone in doing this as many editing apps, both open source and proprietary, from Darktable and GNOME Photos to Photoshop, make use of ‘dark’ themes by default.

Among other features and changes new in this release:

Photographers can take advantage of newGEGL-based photo filters in GIMP 2.10, including Shadows/Highlights and high-pass.

Additionally, it’s now possible to use Darktable or RawTherapee as plug-ins to open raw files in GIMP.

And of course, there’s a new splash screen to greet you each time you launch the app:

A number of experimental tools are included, but not enabled by default. You can turn these on (and off again, if you encounter issues) by launching GIMP 2.10 with the following flag:

Then head toEdit > Preferences > Playground to enable the following tools:

For a closer look at all of the changes see the GIMP 2.10 release notes or, for even more detail, review the change-log.

How to Install GIMP 2.10 in Ubuntu & Linux Mint

So that’s what’s new, but how can you try it?

GIMP 2.10 downloads for Windows, macOS and Linux (as source code) are available on the official GIMP website.

You can also install this update on Ubuntu 16.04 or later using one of the following methods.

The recommended way to install GIMP 2.10 on Linux is by using the official Flatpak app on the Flathub app store.

If you followed our list of things to do after installing Ubuntu 18.04 you should have Flatpak (and the Flathub repo) set-up already. If so, just search for GIMP in the Ubuntu Software app, find the Flatpak version, and install.

Alternatively, you can also run this command to install it from the repo directly:

Uninstall GIMP 2.8 (if installed) before adding this PPA.

If you’re a fan of traditional package management then developer Otto Kesselgulasch’s GIMP PPA has you covered. His PPA has the latest version of the GNU Image Manipulation Program ready and waiting for Ubuntu 17.10 and above (16.04 builds are said to be on the way) users.

Although not official the PPA is maintained by a GIMP developer. As such I think this PPA is the best way to install GIMP 2.10 on Ubuntu, Linux Mint and other Ubuntu-based Linux distros.

And to do so open a new Terminal window and run these commands:

If you’re all about Snap apps then keep an eye out. An unofficial Snap of GIMP 2.10 will likely appear on the Snap Store in the coming weeks.

AppImage fans will need to be patient. Build issues currently mean a GIMP appimage is not yet ready. Keep an eye on this Github page though. 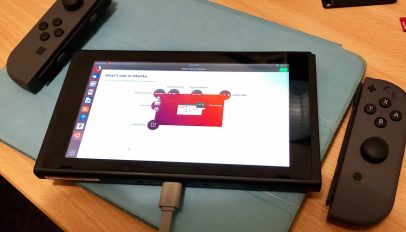 This is Ubuntu 18.04 Running on the Nintendo Switch
Read Next