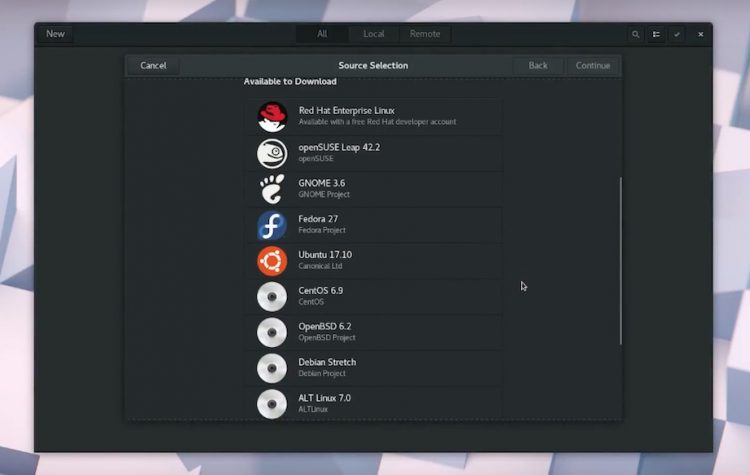 Creating Linux virtual machines on the GNOME desktop is about to get a whole lot easier.

The next major release of GNOME Boxes is able to download popular Linux (and BSD-based) operating systems directly inside the app itself.

Boxes is free, open-source software. It can be used to access both remote and virtual systems as it is built around QEMU, KVM, and libvirt virtualisation technologies.

For its new ISO-toting integration Boxes makes use of libosinfo, a database of operating systems that also provides details on any virtualized environment requirements.

In this (mis-titled) video from GNOME developer Felipe Borges you can see just how easy the improved ‘Source Selection’ screen makes things, including the ability to download a specific ISO architecture for a given distro:

Despite it being a core GNOME app I have to confess that I have never used Boxes. It’s not that I don’t hear good things about it (I do) it’s just that I’m more familiar with setting up and configuring virtual machines in VirtualBox.

‘The lazy geek inside me is going to appreciate this integration’

Admitted it’s not exactly difficult to head out and download an ISO using the browser, then point a virtual machine app to it (heck, it’s what most of us have been doing for a decade or so).

But the lazy geek inside me is really going to appreciate this integration.

So, thanks to this feature I’ll be unpacking Boxes on my system when GNOME 3.28 is released next March. I will be able to launch Boxes, close my eyes, pick a distro from the list at random, and instantly broaden my Tux-shaped horizons.