Linux Mint is planning some big HiDPI improvements for its next major release.

Big enough to see HiDPI enabled by default in Cinnamon 3.6.

Those using Linux Mint on a device with a HiDPI display currently have to dive into the display settings to double UI scaling (200%).

From the vague commitment to improve HiDPI in Cinnamon 3.6 on Linux Mint 18.3 it sounds like the distro will detect when scaling should be enabled and apply it automatically.

No word on whether/if fractional scaling (1.25, 1.5 etc) will be implemented. Based on the terse conclusion to this bug report filed against Cinnamon, I’d say no!

I’d imagine the news does mean we can expect to see additional work done to reduce the fuzziness and blurriness within the Cinnamon UI and many of Linux Mint’s core application set.

Other Changes Coming in Linux Mint 18.3

As we reported recently, Linux mint 18.3 will ship with new refined version of its Mint back-up which focuses on backing up personal data.

But to cater to more advanced use cases Linux Mint 18.3 will also include a new back-up app called Timeshift.

Timeshift tasks itself with creating and restoring system snapshots, making it a great accompaniment to Mint Backup.

The configuartion section for managing Cinnamon Spices, including applets, desklets, extensions, and themes has (yet again) been revamped, as this screenshot sneak peak shows: 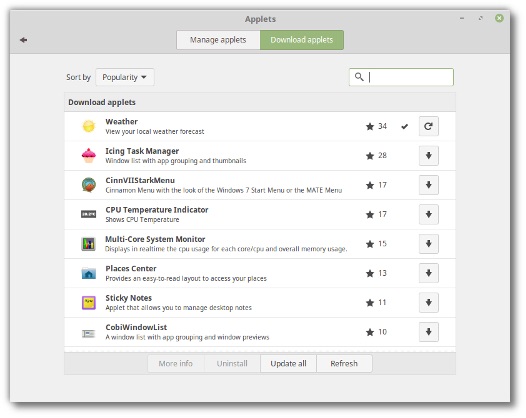 Other notable news shared in the latest Linux Mint monthly update includes word that a new app, mintReport will be included. This app will generate a stack trace when an application crashes, which can then be passed on to Linux Mint developers to help them fix whatever issue is at play.

Finally, the GNOME Sushi fork file previewer nemo-preview will play animated gifs. This is will be handy if you made use of our recent guide which showed you how to make an animated gif from video on Linux.