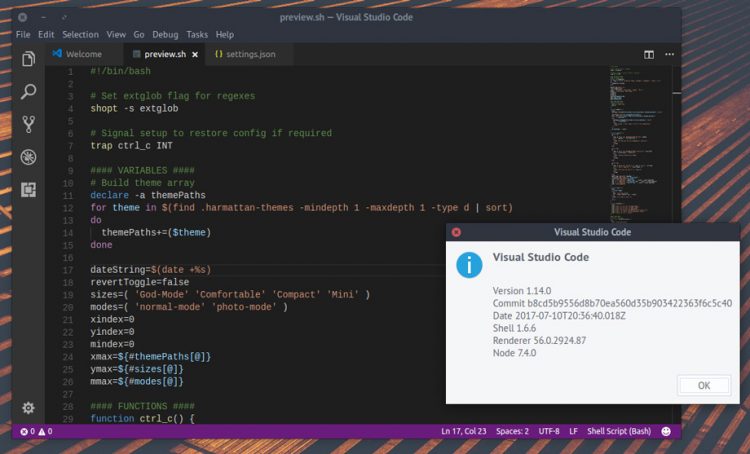 Microsoft has released an update to Visual Studio Code, its open-source code editor for Windows, macOS and Linux.

Visual Studio Code 1.14 is a sizeable update to the Electron-based editor, and adds a slate of new features, various stability and usability improvements, plus a welcome dose of bug fixes.

Selection has been re-implemented in the integrated Terminal. You can now select and copy text from more than one page of the terminal. There’s also a new Select All command and basic find functionality, plus and smarter selection of URLs.

The Command Palette is now able to show the last typed input when reopened, and a (configurable) list of the most recently used (MRU) commands persists between sessions.

Auto indentation is another welcome feature and, as the name suggests, can be enabled to auto indent when typing, moving, and pasting TypeScript, JavaScript, HTML, CSS, JSON or another language with indentation rules. Microsoft says these specific set of rules are still under development, so do expert some quirks if you choose to use this feature.

Other highlights in this release:

See the full release announcement for a wealth of additional context, background and detail on these and other new features in this release.

Visual Studio Code is a free download available for Windows, macOS and Linux (including Ubuntu) direct from the VS Code website:

You can also add the official Visual Studio Code repository to your software sources to receive the latest (and future) updates via Software Updater. This repo is added automatically when you use the official installer (above) but you can also add it manually:

Add it your system:

Then, add the VS Code repo:

And, finally, install VS Code:

Once the app is installed you can launch it from the Unity Dash, GNOME Activities, or whatever app launcher/menu your desktop uses.