Whenever I write about a terminal emulator here on OMG! Ubuntu! I get a lot of comments from readers asking to know why I didn’t mention x-alternative or y-equivalent instead.

And amongst those comments there’s one terminal app that gets called out time and time again: Terminix.

Now, admittedly, I don’t live at the command line; I regularly use apt, snap and a few other CLI utilities, and occasionally checkout Git branches.

So, for my needs at least, GNOME Terminal, the default terminal emulator shipped on Ubuntu, has all of the features and functionality I need.

But each of us use our Ubuntu machines differently. GNOME Terminal may not be your cup of tea.

It helps that the Ubuntu archive is packed full of all kinds of terrific terminal emulators, including Terminator and Tilda, the drop-down Guake, and the aforementioned Terminix.

Wanting to see what the fuss is all about, I installed Terminix from the Ubuntu Software store.

Terminix/Tilix is a tiling terminal emulator. This means it can run more than one terminal in the same window at the same time. You can split terminal sessions and tile them both vertically and horizontally. 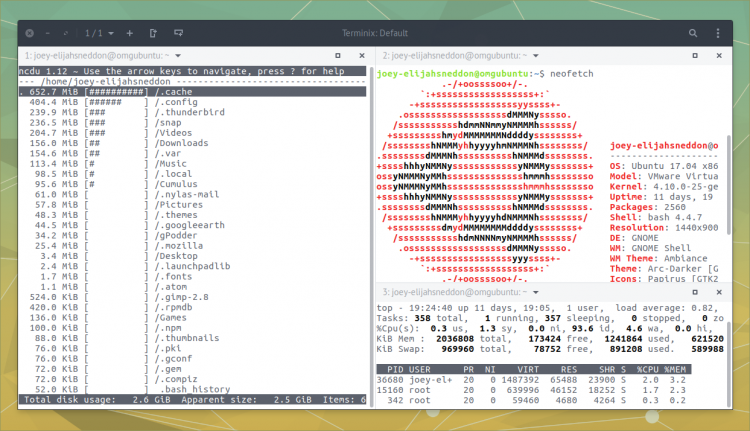 Terminix had to change its name earlier in the year and is now known as Tilix. The Ubuntu archives has an older build of the app available, which is what I’ve used in this post, and as such still it still uses the Terminix name.

The overall layout and design of the app draws heavily from the GNOME Human Interface Guidelines (HIG). As such, Terminix/Tilix looks the business on a modern GNOME desktop like GNOME Shell and Budgie.

There’s also support for using different profiles in each terminal pane you run; and the ability to run multiple sessions simultaneously within the app and move between them using a thumbnail switcher: 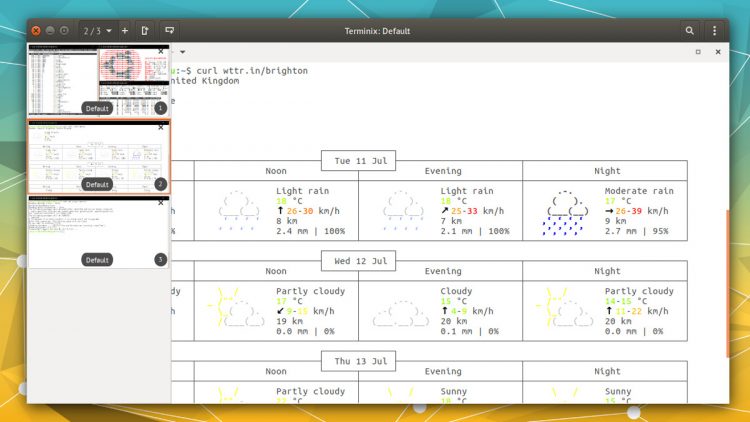 Just like tearing a tab from your browser you can drag any terminal out of the app to run it independently or drop it on to another terminal to merge it. Each tiled terminal can also be maximized to the full height and widget of the main window at any time, and then minimized back to where it was.

The features page on the Tilix website has more info on the features you can find in this terminal emulator, but here’s a concise overview:

Like the sound of it and want to try it?

If you’re reading this article from Ubuntu 17.04 you can install Terminix on Ubuntu from the Ubuntu Software app, no PPA required:

Once installed you can find and open Terminix from the Unity Dash, the GNOME Applications Overview, or whatever app menu/launcher you’re using.

If you want to install Tilix on Ubuntu you need to download the latest release — ‘Tilix.zip’ — from the project’s Github releases page below:

Once downloaded just extract the archive to the correct location and compile the schemas by using these two commands:

You can go and and launch ‘Tilix’ from the Unity Dash, the GNOME Applications Overview, or whatever app menu/launcher you’re using.

If you try the app out (or have done in the past) do let us know what you think about it by placing a hit and run vote or leaving a comment.

Home » Apps » Terminix is a Tiling Terminal Emulator for Linux