How about all of ’em.

Since news broke that Ubuntu is to switch back to GNOME in upcoming releases plenty of you have been mailing in, shouting out, and spotlighting Unity-style features that have GNOME equivalents — Plotinus among them.

Now, I admit that I’m a) late to mention this and b) i’m being lazy describing it as an analog to the Unity HUD. Plotinus is more closely inspired by the command palette in the Sublime Text and Atom text editors.

“[Plotinus] automatically extracts all available commands by introspecting a running application, instantly adapting to UI changes and showing only relevant actions. Using Plotinus requires no modifications to the application itself!” reads the project blurb on Github.

What this means in practical terms is that all of the commands and actions you’d normally find in app menus and  can be accessed and actions through an Atom command palette style UI.

Just press Ctrl + Shift + P and away you go.

Now a few things to note:

In my brief hands on I have to say I found the app to work extremely well, as expected, and really lends itself well to keyboard based workflows. It’s a bit of a shame it’s limited to GTK3 apps only.

Although a bit of a rump ache to install and set-up (as you’ll see) it’s a promising alternative to traditional app menus.

Install Plotinus on Ubuntu 16.04 and up 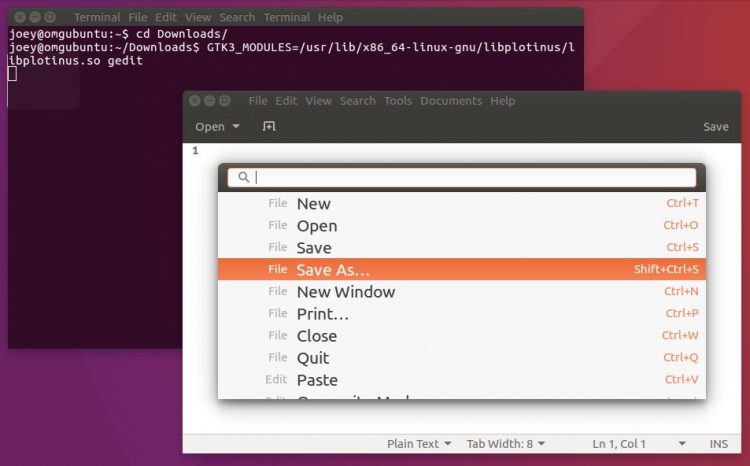 There are two ways to install Plotinus on Ubuntu 16.04: by compiling it manually from source, or by installing one of the installers packaged up by the dude from the Webupd8 blog.

To install Plotinus the hard way just follow along with instructions on the Plotinus Github page.

To install Plotinus the easy way just download and double-click on one of these.

Next for the hard part, which I’ll let the devs explain:

“Because of the complexity and clumsiness surrounding Linux environment variables, Plotinus does not currently install automatically. The easiest way to enable Plotinus for all applications is to add the line GTK3_MODULES=[libpath] to /etc/environment, where [libpath] is the full, absolute path of libplotinus.so as built by make.”

With this app being quite young and still under active development I’d maybe suggest not doing the above. Instead, an alternative way to use the app is to do enable it manually on an individual app basis.

For example, on my Ubuntu 16.04 LTS (64-bit) set-up with Plotinus installed, I can use it with the Gedit text editor by running:

Adjust the lib path based o your own system, and remember you can use tab complete to save yourself typing it all out by hand.

If you’re feeling super brave you could easily add the command above to the .desktop launcher file of a chosen app, so that it launches with Plotinus enabled automatically.

Apps Dev How To hud plotinus

Ubuntu Plans To Switch to Wayland By Default
Read Next