Screen captures can be exported as animated GIFs, but Peek 1.0 adds WebM and MP4 exporting to the mix, making it a fully-fledged rival to other desktop screen recording apps like Green Recorder and Simple Screen Recorder.

Other highlights in the Peek 1.0 release include a configurable keyboard shortcut to start/stop recording (which defaults to Ctrl + Alt + R); command line parameters to control recording; a new default frame rate of 10fps; and an option to not record the mouse cursor. 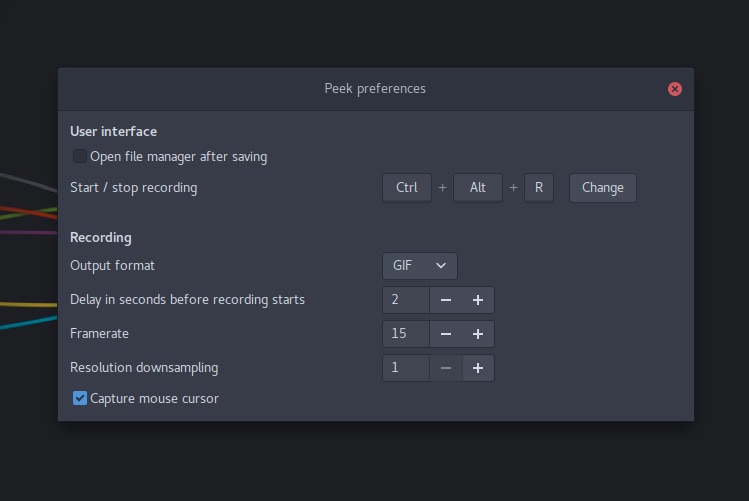 All of these improvements are in addition to those introduced in earlier revisions. You can still adjust resolution and frame-rate, configure recording delay, and see notifications when a recording is saved and exported.

Install or Upgrade Peek on Ubuntu

Peek 1.0 is available to install on Ubuntu 16.04 LTS and above by adding the official Peek PPA to your software sources.

To do this, open a new Terminal window and run:

A Flatpak version is also available. Note that this requires the Flatpak PPA on versions of Ubuntu which don’t ship Flatpak in the archive (i.e. 16.04 LTS) and, ideally, even on those it does as the PPA carries the very latest version (i.e. the version on 16.10 is rather outdated).

You’ll also need to have xdg-desktop-portal-gtk enabled to get the unlock the functionality of the Peek Flatpak.

For more information on adding the Flatpak head to the following Github page: