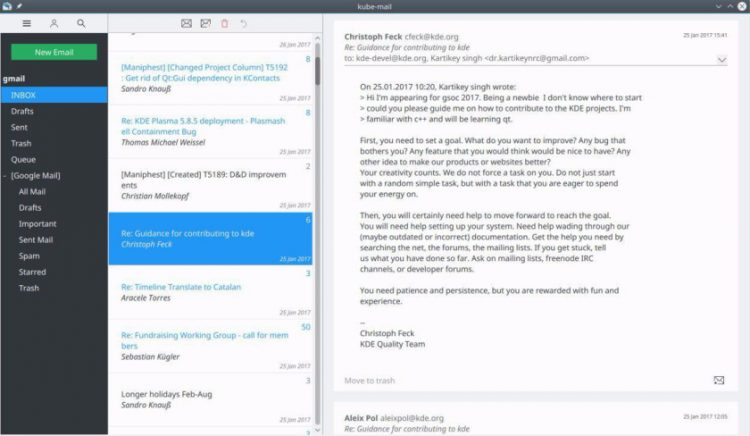 Kube 0.1.0 was released this weekend and is the first pre-production tech preview release of the app. While it’s still (very) rough around the edges, it’s still a promising glimpse at what could mature to be a standout KDE application.

‘Right now Kube is missing a lot of core features’

Kube is pitched on GitHub as: “a personal information and collaboration application currently in its early stages of development. It uses Sink [formerly known as Akonadi-next] for data access and synchronization, and leverages the KDE PIM codebase where possible.”

”This is a tech preview really and not meant for production use,” says Kube developer Christian Mollekopf  in a blog post announcing the release.

“However, this marks a very important step for us, as it lifts us out of a rather long stretch of doing the ground work to get regular development up and running. With that out of the way we can now move in a steadier fashion, milestone by milestone.”

What works (and what doesn’t)?

Right now Kube is missing a lot of core features one expects from a production ready e-mail app, much less those of an address book and PIM tools. Gmail support is described as “not great”, there’s upgrade path for migrating to new versions, and the UI is still a work in progress.

But, you know, those caveats aside, Kube looks like it has an impressive set of features and core functionality already. Mollekopf says brave testers “…can setup an IMAP account, you can read your mail (even encrypted), you can move messages around or delete them, and you can even write some mails.”

The focus in the near-future will be on kitting Kube out with a comprehensive set of mail management features. After that, attention will aim to assemble a usable address book, and improve the search experience.

No packaged versions of Kube are ready for end-users to install, but developers can get up and running with tarball downloads, with links to download the various parts available at the end of this blog post.