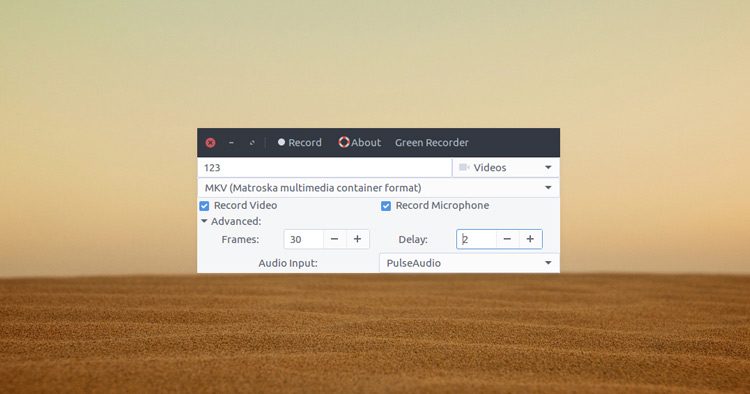 Want to record your Ubuntu desktop for a screencast, video tutorial, or bug report? I highly recommend giving Green Recorder a shot.

Green Recorder is a minimal yet perfectly functional desktop screen recorder app for Ubuntu. It’s built using Python, GTK+ 3 and ffmpeg, and supports recording audio and video at the same time, making it ideal for screencasting.

As of writing Green Recorder only lets you record your screen on Ubuntu, Linux Mint and other derivatives/flavours.

Unlike, for example, Simple Screen Recorder, you can’t specify or crop to a particular region with this app. It records your entire screen. I don’t see this as a negative as you can easily crop or zoom in to a specific section in any competent video editor.

There are five quality levels (1 being best), option to set a custom frame-rate, and a choice of video formats to record/export to, including mkv, avi, mp4, flv, wmv and nut.

What’s really exciting (well, to us) is that the developers hope to add Wayland support in GNOME sessions soon.

Admittedly it’s not difficult to find a free desktop screen recorder for Ubuntu or other distros. GNOME Shell even has a hidden screen recording mode built-in!

Using the app is easy. When open you’ll need to enter a file name, and select a folder to save to. Then adjust the frame-rate and pick a file format to record in. When ready to record hit ‘Record’ button in the application’s header bar and, et voila,  it begins recording your screen.

When you feel you’ve recorded what you want you will need to stop the recording process for your screen capture to save. To do, simply click on the system tray icon for the app and select the “Stop Record” option from the menu.

One bit of advice I will give: make sure you change the file name when making multiple recordings. If you don’t the app will overwrite a file with the same name, in the same format, in the same directory without giving you any warning.

As Green Recorder uses ffmpeg as its backend the screen recording results are solid. You can see a short (silent) demo of my desktop captured at 30fps on the best settings. Note: there is no audio with this video.

It’s still early days for this app so don’t be too harsh if you encounter bugs, glitches or flaws in the app be sure to pop along to the project’s Github to file an issue accordingly.

Green Recorder is available on Ubuntu 16.04 LTS and above via the Green Project PPA. To install on Ubuntu, open a new terminal window and run:

Source code can be found on the Green Recorder Github page, where you can also read more information about the app and report any bugs you encounter.

Thanks Robert S (via fosspost.org).