A new YouTube video claims to show an ‘quick overview of what’s to come to Unity 8’ in a future update.

Uploaded by Kugi Javacookies (not sure if that’s his real name), the clip is described as offering a “quick overview of what’s to come soon to Unity 8.

“Since the silo has now been signed-off by QA, so it will probably land really soon.”

Kugi adds that he finds it “awesome to actually follow projects even up to the small details. Codes in launchpad, actual projects in bileto and queued silos for QA testing in Trello. Really cool! :D”.

Bileto is the automated ‘upstream release process’ (called ‘CI Train’) where packages and updates go through QA (quality assurance). A Silo is basically a fancy-pants PPA.

The clip shows Unity 8 built from #2022, which features Phone, Tablet and Desktop window management code merged into ‘one that can do it all’, new spread visuals, and other changes.

According to information on Launchpad, Ubuntu Touch OTA-14 will target 28 bugs.

There’s no exact release date for Ubuntu Touch OTA-14, though it should make an appearance some time in November for all supported Ubuntu devices. There’s also no guarantee that all of the changes in Kugi’s video will make it in to the release. 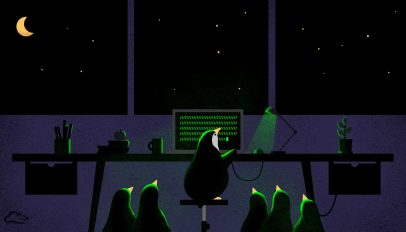 Awwh, This Linux Wallpaper is Adorable
Read Next