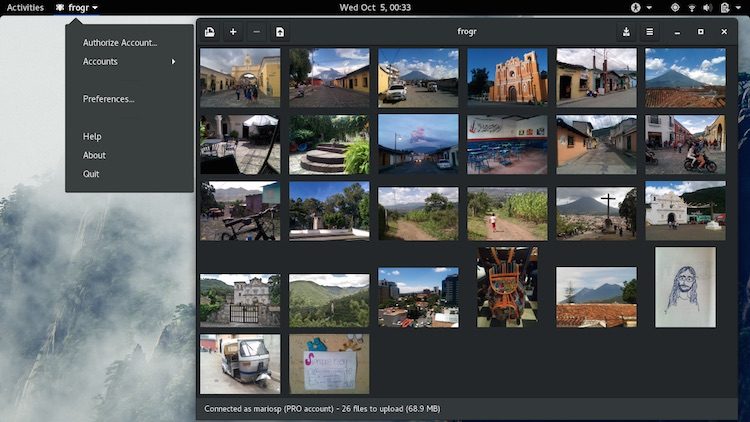 Like most people living in 2016 I don’t use Flickr. But if I did, I’d probably use Frogr to manage and upload my photos.

Frogr is one of a few apps that I’ve written about across all 7+ years I’ve run this site. To hear today, that after almost another year of development, there’s a new release available is as comfortingly familiar as it is awesome to hear.

Frogr 1.2 is a small update that packs a modest set of improvements, including support for Flatpak, the new cross-distro package distribution format.

This will make it easier for you (and other users like you) to install the latest version of Frogr  ”regardless of which [Linux] distribution you have […] as long as you have the org.gnome.Platform/x86_64/3.22 stable runtime installed locally.”

As part of the Flatpak work Frogr developer Mario Sanchez Prada has made sure that you can still authenticate to Flickr from inside the sandbox, and open pictures/videos in whichever non-sandboxed photo viewer or editor you prefer.

Elsewhere, the app also gets some miscellaneous bug fixes, and it drops the build dependency on intltool, instead needing gettext v0.19.8 or later. See this post for more on the ‘why’.

You can install Frogr 1.2 on Ubuntu 16.04 LTS and up from the official Frogr PPA. Run the following commands in a new Terminal window:

If the runtime requirement for the Frogr flatpak weren’t so …large I’d walk you though how to install the Frogr Flatpak on Ubuntu 16.04 LTS.

Alas, that how-to (which I’m itching to write!) will have to wait until a more manageable app install comes along. If you know of/find any nifty desktop apps being distributed as a Flatpak do let us know using the Tip Form.