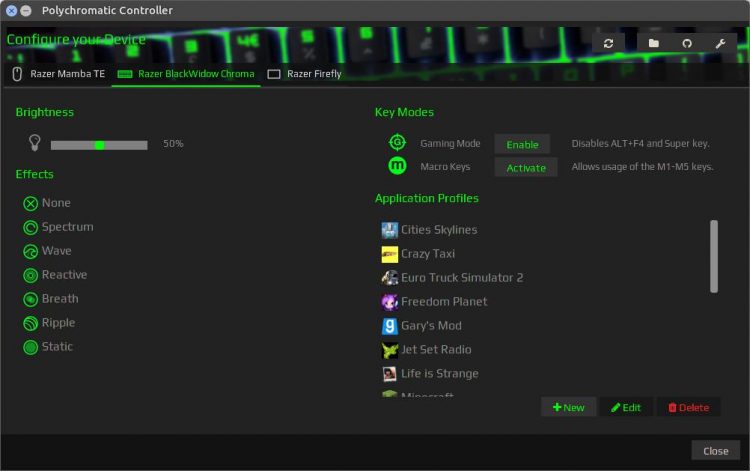 Last month we wrote about a desktop app that let you configure Razer keyboards on Linux. It’s called Polychromatic.

Our article appeared at a time of transition for the app as it was in the middle of switching away from requiring the Razer Chroma drivers to the newer, more capable “terrycain” Razer drivers.

You can see a list of Razer devices supported by the terrycain driver on its Github page.

This new fork of Razer drivers for Linux offers support for more Razer devices, ships with a new daemon, and provides developers with a flexible python library with which they can build natty front-ends (like Polychromatic).

Polychromatic has since been updated to take full advantage of the new driver stack.

You  can now configure a broader set of devices, including Razer mice, Razer mouse mats and, for the 1990s cyberpunks among you, the Razer Tartarus gamepad too. It also supports more features, including the (infamous) ripple lighting effect, on-the-fly macro recording, and lets you set up and switch between multiple Razer devices.

All of the above is in addition to the existing core feature set which allows you to:

To install the new Razer drivers on Ubuntu you will need to add the following PPA to your Software Sources, update and then install the  driver, kernel modules and related fuzz.

Quickest way to do this is, you guessed it, through the Terminal:

Once everything has downloaded and installed correctly I strongly recommend that your reboot your machine. This is to make sure that all the new modules load up correctly, as intended.

Polychromatic 0.3 is the desktop app you use to configure your Razer devices with on Ubuntu.

To install the latest release of Polychromatic on Ubuntu 16.04 LTS run the following two commands:

Once everything listed above has installed correctly you can go ahead and launch the app from the Unity Dash and get configuring!

Apps How To polychromatic razer

Firefox 49 Released, This Is What’s New
Read Next