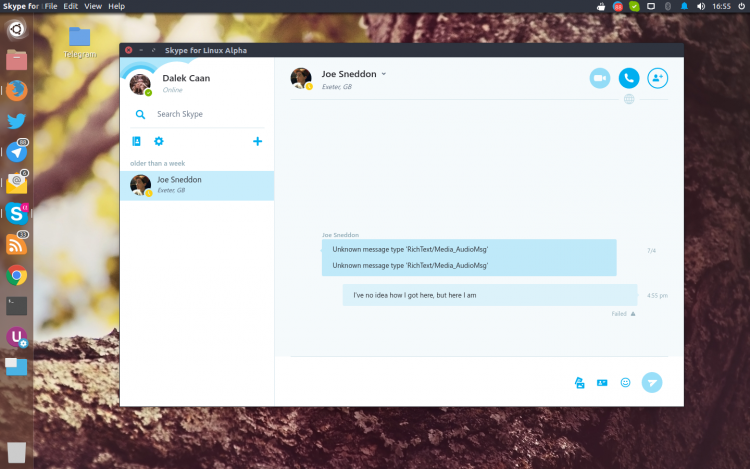 A brand-new Skype for Linux client has been announced — and you can try it today.

Skype say the launch of the new Skype for Linux client reaffirms “our commitment to the Linux community.”

And by jove it should. The existing (and soon to be deprecated) Skype Linux app hasn’t been updated in over two years!

Don’t call it a web-app

The new version of Skype for Linux uses WebRTC to handle voice calls, which the VoIP service says will allow them to “…continue to support our Linux users in the years to come.”

Web-based technologies are used for more than its communication protocol: the client is built using the tried-and-trusted Chromium-based Electron shell and Node.js combo. This allows it to look and feel like a native desktop app and offer some basic OS level integration, such as a system tray icon.

Not All Features Present

As an alpha version, the new Skype for Linux has a number of drawbacks. For one, you can can’t make or take calls to anyone using the previous versions of Skype for Linux (v4.3.0.37), and if you were hoping to be able to place video calls you’re similarly out of luck.

A quick list of the things you can’t do in the Skype for Linux alpha:

And a quick list of the things you can do:

Skype say they plan to “release an update every 2 weeks or so”, with a view to adding missing features “in the coming months as we move from alpha to beta and then to full general availability.”

Skype caution that the alpha release is ‘not a fully functioning Skype client as of yet’ and that more features will arrive in the near future. They’ve said video calling is a priority, and that they’ll be looking at ways to improve integration with Linux desktop features, such as native notifications.

“We are looking into snap [but] need to consider support for Ubuntu Phone,” they also told us.

Hit the download link to grab the latest alpha build for Ubuntu (64-bit only).  Do share your experiences of the new client in the comments.