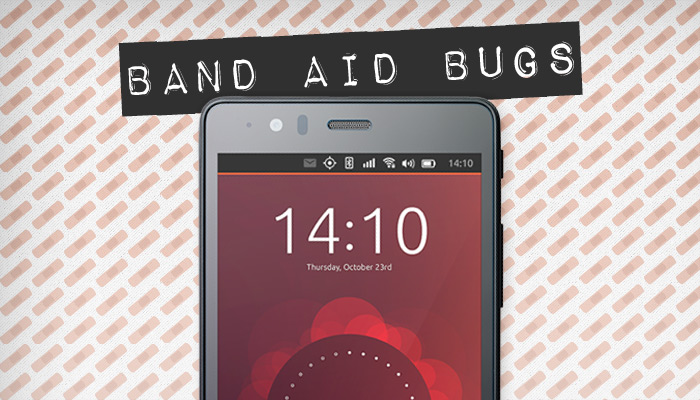 Don’t worry; Canonical isn’t branching out to launch a range of adhesive bandages for cracked screens. No, it’s the name of a new developer initiative spearheaded to help polish its fledgling mobile platform.

The company want to foster contributions to the Ubuntu Phone platform from those who know they want to get involved in helping build the OS but don’t know where to start.

And what better to start than by tackling some small, bite-sized bugs?  It’s a trick that’s worked well before (anyone remember the 100 paper cuts project?).

Canonical’s Julia Palandri explains more in an e-mail sent to various Ubuntu Phone mailing lists, an excerpt of which we’ve pasted below.

“We want to offer a curated set of bugs that we think could be doable with some help from more experienced people. There should be no design/decision making involved at least in the first bugs bugs (sic) you tackle; hopefully people will grow as they get to know the codebase and the ideas behind the design.”

“Many of us are avid users of the Ubuntu phone on a daily basis. And we know there are some rough edges to take care of. The Canonical team delivers, with each OTA, many bugfixes, improvements and features. And yet, there’s always room to improve.

“Many of us are already somehow familiar with launchpad, reporting bugs, and adding some logs. Many of us have already tried to debug something, find the cause of a certain error, even tried to fix something running a command on the terminal…”

‘Getting contributors started on small, bite-sized bugs is a trick that’s worked well in the past…’

Firstly, there needs to be bugs for the project to balm. Julia encourages Ubuntu Phone users to report bugs they encounter on Launchpad, the project hosting and issue tracker website maintained by Canonical.

Take care not to file a duplicate issue. Instead, check for similar issues and click the ‘Affects Me’ button to bump its visibility to developers.

Launchpad has a list of band-aid bugs for Ubuntu phone in need of fixes. As the project is open-source you’ll find all the code you need to hack on ready and waiting.

You can filter through incomplete bugs to add further information to issues reported by other users, e.g., reproducing an issue on your handset and providing system logs, handset info, and other data to help developers understand what the problem is and how it might be fixed!

View a list of Band Aid Bugs on Launchpad

Rosyidi Alwan Microsoft thanks for this. Hope they will port their microsoft…
KDE Connect is Now Available on Windows

João Paulo Albuquerque But you're opening them .-.
How to Add Mac OS X’s ‘Quick Look’ Feature to Ubuntu

João Paulo Albuquerque What are the arguments to be a bad design?
How to Add Mac OS X’s ‘Quick Look’ Feature to Ubuntu