Musicians who use the Ubuntu Phone can add a nifty new tuner app to their collection.

The simply titled ‘Tuner’ app for Ubuntu phone (and tablet) currently supports tuning a Ukulele. Support for guitar tuning is to arrive in a future update.

It works very, very simply: just open the app, twang a string, and see how in tune it is. Adjust, retwang, repeat.

Alright, So It’s Not Angry Birds

I know what you’re thinking: this app is not going to single-handedly spearhead a surge of interest in the wannabe mobile platform.

But that’s not the point.

Ubuntu needs apps like this — niche, useful and well designed apps — if it is to attract more than the fleeting interest of the fast-fading and wholly fickle early adopter crowd.

While few people will need to usr this app, seeing it available as you scan for something else fills the psychological peripheral vision; the platform will seem far more attractive when lots of attractive, useful apps are being built for it.

Tuner was developed at the Beijing Ubuntu hackathon and app should be considered ‘beta’ software for now. 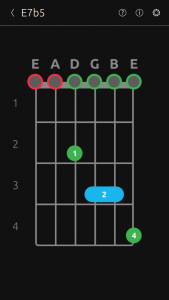 A small updating to this post, but another music tuning app recently hit the Ubuntu Store.

Guitar Tools for Ubuntu is, as the name might have otherwise told you, a collection of tools for guitar players.

The native app currently offers guitar players the following features, all in the one app:

The app is free and open-source. It can be installed on Ubuntu Phone and Tablet by searching for ‘Guitar Tools’ in the Ubuntu Store scope.