The world’s most popular digital signage solution for the Raspberry Pi is to move to Snappy Ubuntu Core.

Screenly says it is adopting Ubuntu Core “to give its customers a stable platform that is secure, robust, simple to use and manage, all available on a $35 Raspberry Pi”.

Snappy Ubuntu Core is the smallest version of Ubuntu. A paired back, stripped down and transactionally maintained version of the OS that has been designed specifically for robots, drones,  embedded devices and the ‘internet of things’.  It takes up just 40MB of memory.

Digital Signage is a Big Deal

From my work over on our sister site OMG! Chrome! I know that digital signage is a vibrant, competitive market It’s an area Google has put a lot of effort in to counting with Chrome OS, positioning Chromebases, Chromebits and Chromeboxes as a viable alternative to the inflexible embedded Windows products that traditionally dominate.

From a simple advertising display in a hotel lobby or independent retail outlet to a live, updating stock ticker in the foyer of a corporate building: digital signage is as versatile as it is integral to business.

Screenplay may not be the best-known digital signage player — sorry, Screenly PR rep — but its decision to use Raspberry Pi has made it one of the most versatile.

Now, in moving its platform on to Snappy Ubuntu Core,  the company becomes even more agile in a fast-innovating space It will be able to update and manage both OS and applications that run on it separately, independently and safely. Snappy will help reduce the number of costly in-store visits when something goes wrong as virtually any update can be automatically, remotely rolled back.

“This means that Screenly players will be kept up to date with the latest version of the Screenly software, and also benefit from continuous OS updates for enhanced security, stability and performance,”  explains the official press release, adding that: “A compromised display can be corrected immediately and the security of devices that are in public sphere is drastically improved.”

CEO of Screenly Viktor Petersson says the transition to Ubuntu Core will allow the company to be more “flexible and to focus on our software rather than managing an OS and software distribution across our large fleet of devices.”

Mark Shuttleworth, the founder of Canonical agrees, noting that: “Ubuntu Core is perfectly suited to applications in digital signage. Its application isolation and transactional updates provide unrivalled security, stability and ease of use, something vital for constantly visible content.” 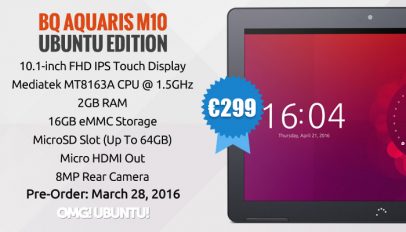 Ubuntu M10 Tablet Review Round Up
Read Next