A proverbial pigeon tossed among the kitties: former Canonical employee Jono Bacon has suggested that Ubuntu Phone should ditch Debian …for Android.

The full article, which Jono himself says is based on a somewhat limited technical understanding of the phone and could be ‘total nonsense’, is a fun conjecture.

The core thrust: “Scopes offer a way of getting access to content quickly, they don’t completely replace apps. There will always be certain apps that people are going to want. The common examples are Skype, WhatsApp, Uber, Google Maps, Fruit Ninja, and Temple Run,” Bacon writes.

“New platforms usually solve this […] by spending hundreds of thousands of dollars to pay those companies to create and support a port. This isn’t really an option for the Ubuntu phone (there is much more than just the phone being funded by Canonical).”

Jono’s thought-logical solution to solve this? Use Android’s popularity to Ubuntu’s advantage; take the platform and, like Amazon, Meizu, Xiaomi and others have done, fork it, rip out Google services and enjoy the rewards.

It would still look, feel and function as an Ubuntu Phone of course but (presumably) lower the barrier to entry for everyone — developers, users and hardware manufacturers.

Quite where that would leave the “single codebase” convergence Canonical is chasing, not to mention Mir, Snappy, etc, is left for the reader to guess. Though Bacon does note that UI convergence could be maintained:

“If Unity is essentially a UI that runs on top of Android and exposes a set of services, the convergence story should work well too, after all…it is all Linux. It may need different desktop, phone, tablet, and TV kernels, but I think we would need different kernels anyway.”

It’s an interesting posit from the former Ubuntu community manager. Though unlikely to result in any dramatic shift on the part of Canonical’s engineering team it will surely raise a few eyebrows!

The blog post, despite the person writing it, Is not any indication of a volte face on the part of Canonical.

‘Pressure from Carrier to Support Android’

While rebasing from Debian to Android is a tall ask the question of whether Canonical should at least provide a  ‘compatibility layer’ for run Android apps, similar to that offered in Jolla’s Sailfish OS and Blackberry’s in-house operating system, is not.

Indeed, it remains a frequently asked question — not just from users.

A few weeks back we asked Canonical’s VP of Mobile, Cristian Parrino, whether mobile carriers interested in shipping Ubuntu Phone had put pressure on the team to add Android app support.

The answer was ‘yes’ (Parrino is never anything but wonderfully honest). But the pressure didn’t go far. Explaining the Scopes ‘story’ to carriers — and remember: what scopes can do today is just part of what’s planned for them — won them around.

After all, “Android apps run best on Android,” Parrino added.

But does Ubuntu run best on Debian?

For Bacon: “I honestly think some kind of middle-ground is needed to get into the game, otherwise I worry we won’t even make it to the subs bench no matter how awesome our technology is.” 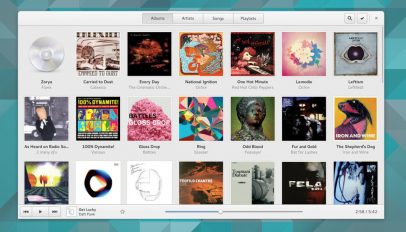 Music, The GNOME Music Player, Is Getting Smart New Features
Read Next