GNOME desktop apps will soon be able to get location data from Android phones.

A Google Summer of Code project is aiming to create a bridge that uses an Android smartphone to provide more accurate location data to desktop apps using the GNOME geo-location service ‘GeoClue‘.

Most Linux distributions, including Ubuntu, come with this desktop location detection framework built-in.

But since few desktop PCs or laptops come with cellular or GPS hardware installed services like GeoClue have to rely on network location detection and IP lookup to detect where a user is — sometimes with frustratingly inaccurate results.

GPS positioning is something most of us are familiar with in our phones. It uses satellite data to accurately locate where we.

Creating a way for the desktop to make use of that data is smart; a better fix on where we are equals a better quality of result from desktop mapping apps, social networking tools and weather utilities.

‘GPS positioning is something most of us are familiar with in our phones.’

The concept of relaying GPS data from a smartphone to a desktop is not new. In fact, a quick Google search throws up how-to guides for Linux going as far back as 2006.

But the way the developer of this project is approaching it for use on the Linux desktop is new.

Current GPS sharing apps on the Play Store are only compatible with select desktop apps on select desktop operating systems and in select configurations (typically requiring bluetooth and a command line tool).

Project lead Ankit Verma will build an Android application that, he explains, “functions as a location server accessible over mDNS for Geoclue”.

“Each time Android LocationListener listens to a new Location, it will transmit that location data to Geoclue in form of NMEA sentence. Geoclue takes that location information and passes it on as GPS location.”

In addition to an Android application Ankit will also build a GUI application to manage the connection on the desktop.

While a few tinfoil hats will misunderstand the nature of project and reach for a loudhailer to cry about an invasion of privacy, the rest of us will, obviously, have noticed that the project is entirely opt-in.

If you do not want your desktop apps to use GPS data from your phone then don’t install the bridging application.

Something as simple as allowing GPS handoff from one device to another is a great start. 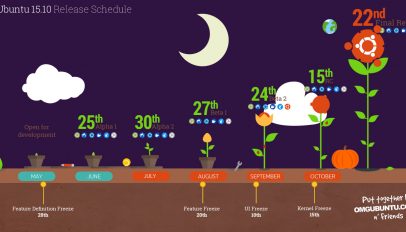 This Is The Ubuntu 15.10 Release Schedule
Read Next