In the market for a new Ubuntu PC? You don’t have to look too hard these days to find a company, both big and small, offering a Tux-friendly product.

Today the company is back with its latest offering, the new Cirrus7 Nimbini.

The new NUC measures a mere 150x150x87mm in size, which is veritable Chromebox territory.

Like its bigger sibling the Nimbi is completely fanless for silent running and is assembled from laser-cut  aluminum layers that are stacked to form a passive cooling system.

The Nimbini is available as a complete assembled system or in cheaper “kit” form.

The kit (which comes in 90 parts) will allow tinkerers and DIY enthusiasts to assemble the devices themselves to not only save on costs but also tweak the design to suit them, e.g. reducing the height if a mechanical drive slot isn’t required.

The Nimbini is features an Intel NUC board and will offer buyers a choice of fifth-generation Intel Broadwell processor, from an i3 to an i7. An M.2 SSD will ship as standard and there will be space for an additional 2.5-inch drive, so storage for multi-boots, movies and cat photos won’t be an issue.

But the best part: the Cirrus7 Nimbini will be available to buy with either Ubuntu 14.04 LTS or Ubuntu 15.04 pre-installed.

The bespoke, custom design does mean that this device is not going to be cheap as a mass produced Intel NUC offered by other retailers. Pricing for the complete system and kit version will be announced near the end of April, with pre-orders going live at the start of May.

Those of interested in buying can expect to have have the cold, silent box sat on their desk before the start of June.

Home » Hardware » Cirrus7 Nimbini — The Most Stylish Ubuntu PC Ever Made? 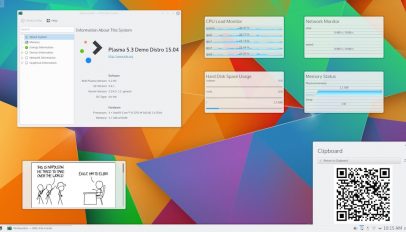