The controversy is over. Your wallet can breathe easy. Your e-mail inbox can once again buckle under an influx of deals. Yes, Groupon has announced it will not be pursuing a trademark claim for the name ‘GNOME’.

Ending a spat that lasted all of 24 hours (publicly), the billion-dollar deals n’ discounts company has confirmed it will forswear a legal joust for the name “gnome” and instead choose new branding for its touchscreen PoS (Point of Sale) machines.

In a statement posted on its website. Groupon say they love open source, adding that it has open sourced many of its own projects on GitHub.

“We will choose a new name for our product going forward.”

Citing “confusion” around its use of the name ‘GNOME’ for its touchscreen point-of-sale terminal, the company says it has “[…]decided to abandon our pending trademark applications for “Gnome.” We will choose a new name for our product going forward.”

Although the kerfuffle was played out in public for less than a day, visibly highlighted by the non-profit GNOME Foundation’s call for $80,000 in donations to fight filings, Groupon says its conversations with the foundation had been taking place behind the scenes for several months.

Ultimately, with no agreement being reached that would allow both to continue it came down to which the company valued more: its relationship with the open source community or the name of a product.

a speedy resolution to a distasteful situation

For their part, Groupon should get credit for nixing their plans. It was a speedy resolution to a distasteful situation.

But this was, surely, the only conceivable outcome. If the Foundation were willing to fight the trademark claims, and Groupon willing to file them in the first place, then the ‘conversations’ held behind the scenes can only have been held on either side of a line drawn in the sand.

What ‘mutually satisfactory resolution’ was the deals site hoping to reach? That we may never know, but the cynical Brit within guesses something along the lines of “Hey Linux folks, let us own the name GNOME and we’ll let you use it — pinky swear!”.

Dining out on your next ‘2 meals for $10’ voucher shouldn’t leave quite such a bitter aftertaste now. 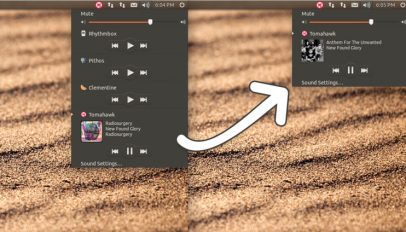 How to Remove Music Players from Ubuntu Sound Menu
Read Next