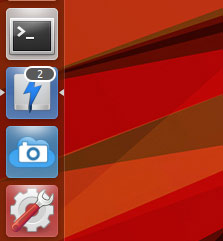 Of all the contentious UI changes to feature in Unity – from auto-hiding menus and immovable launcher position – one stirs up more passion than any other: the inability to minimise applications by clicking on an app icon.

A bug report asking for the feature be re-added remains active. Canonical have not ignored the request. The bug listing features replies from Mark Shuttleworth in which he affirms that the feature won’t be pitching up  on the Ubuntu desktop anytime soon.

In Unity clicking on an application’s icon will launch the app; refocus it; and, if more than one window of it is open, launch an overview picker.

Despite the workflow boons, discontent remains. Some third-party developers have seized on the demand to  create custom Unity builds implementing the much-missed feature.

Unity is far from being the only desktop environment to use “click to open/focus only”. GNOME’s Dash and the Mac OS X Dock all behave the same way: applications minimise to their app icons using window controls only, and are restored when app icons are clicked.

But for the those users accustomed to the approach, thanks in part to the longevity of Windows UI paradigm, the lack of minimise on click remains an annoyance.

Do you miss it? Or have you adjusted to life without it? Let us know in the poll, and share your thoughts in the comments.

Home » Poll » Should Unity Bring Back ‘Minimize on Click’ Feature?