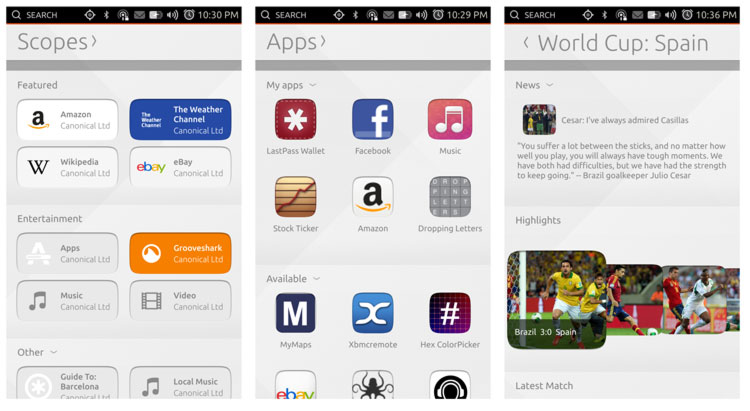 Canonical has published details of its new Scopes technology, set to be at the core of the converged Ubuntu experience.

The “base” of the Unity 8 interface is made up of a series of views, like ‘Apps’, ‘Music’, and ‘Home’. Within each of these views are ‘Scopes’ that serve up a range of results from both online and offline sources, such as music tracks and and sports results.

It’s a great idea that puts content at the heart of Ubuntu.

In the new converged Ubuntu the aim is increase the breadth of discoverability through Scopes; the control users have over them; and improve the way in which data is presented through them.

In short, a big ol’ revamp.

Change is sorely needed; the incumbent approach is less than ideal. A varied mix of data is forced through the same rigid templates, regardless of whether or not it would be best presented in a different way.

To rectify this a new ‘dash toolkit‘ is being introduced that allows data to be displayed in new, flexible ways. For example, results for an image search would work best as large thumbnails in a carousel for browsing, while news snippets are more useful in list view, with a wider content area to display text.

In the current desktop version a glut of Scopes are enabled by default. This is noble in aim, but poor in reality; a simple search for something innocuous returns an ungainly, un-navigable vomit soup of fixed-size thumbnails.

With the heuristics so out of whack many reach for the off switch. In doing so they miss out on some of the benefits.

The new Dash coming to Ubuntu tackles this head on in a number of ways. The first, mentioned above, is by allowing Scopes to present data in a more engaging way. The second is by introduced a ‘Scopes Store’ that allows content sources to be installed and disabled easily. 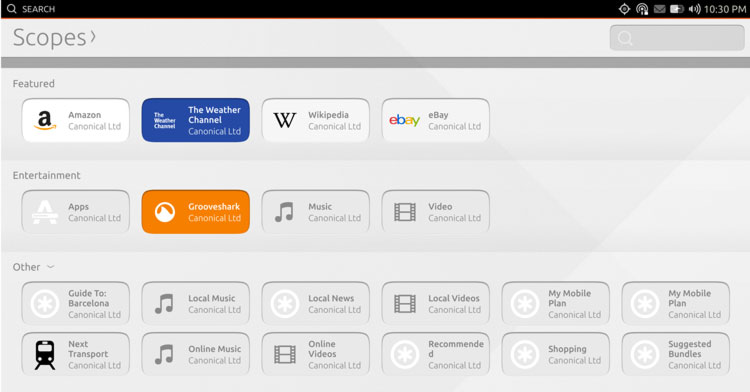 No doubt keen to avoid a repeat of the backlash surrounding the desktop implementation, these ‘new scopes’ appear to have been built with privacy concerns baked in from the get go.

Each scope, whether added through the Scopes Store or enabled by default, will run independently in its own sandbox. This sandbox, Canonical say, “is enforced at the kernel level” thereby making it impossible for a scope to break out of the sandbox and do something it shouldn’t, like spam your contacts book.

But the insulation doesn’t stop there. Scopes will only be able to have one of two permissions: the ability to access the network or file system; they can’t have both. This approach “prevents a scope from retrieving sensitive information from the file system and then shipping it out via the network to some remote server.”

Ubuntu say phone and tablet users can expect to find the new technology, which is still in active development, land in the coming weeks. It won’t be included on the desktop version of Ubuntu until Ubuntu 14.10 at the earliest.

To learn more head over to the Ubuntu Developer website.

Jebin I haven't digged deeply but it doesn't support by default.
KDE Neon 20.04 is Out, Available to Download Now

Francesco Barbiero The iso (both user and testing) is 20.04 based since few days ago
KDE Neon 20.04 is Out, Available to Download Now

Eagle It's kinda ironic that you call other people elitists for…
Ubuntu 18.04.5 LTS Released with Linux Kernel 5.4

Carl H What's the difference between a GTK Theme and a GNOME Shell Theme?
The Best GTK Themes