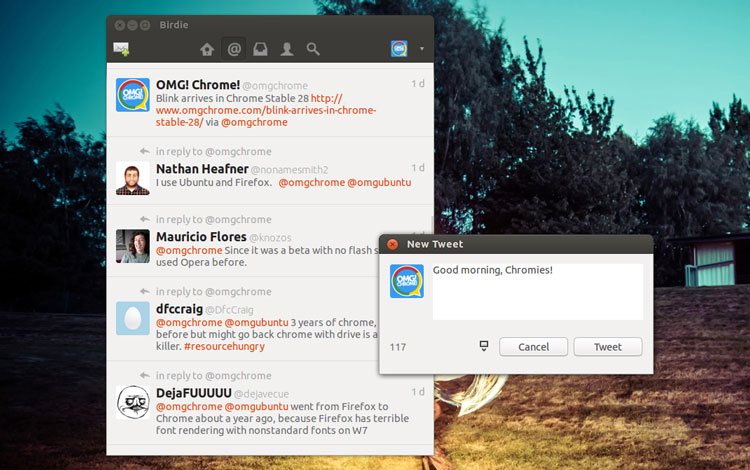 Desktop Twitter app ‘Birdie’ has jumped aboard the crowd-funding bandwagon.

The developer behind lightweight social client is aiming to raise €5,000. This money, he says, will be used to help ‘create the best Twitter client available’ for Linux.

“If you contribute to this campaign, you will make it possible for us to spend a lot more time on Birdie, and improve it at a much faster pace as well as focus our attention on it instead of other things,” Birdie’s lead developer Ivo Nunes writes on the campaign page.

But what exactly does €5,000 of Birdie feed pay for? Nothing too specific, it seems:

Ubuntu users also shouldn’t bank on the app being submitted to the Ubuntu Software Centre. Nunes says that distributing the app on the software store is something he ‘can’t promise’ will happen.

As a Fixed Funding campaign the project will only get money raised if the full €5k is raised by Sunday 25th of August. While a Twitter app may not have the glamour of a unibody metal mobile (i.e. Ubuntu Edge) it is still a cracking little app.

Want in? You can feed the bird some monetary crumbs at the following link.

Want to try Birdie out before you back it? You’ll final some simple install instructions at the bottom of the following post:

How to Install Birdie in Ubuntu