Canonical’s CEO spoke of her excitement and appreciation at the support that’s behind the Ubuntu Edge campaign.

Ubuntu Edge has, in a mere 24 hours, smashed crowdsourcing records for an amount raised in such a short time.

In a video released today Jane Silber thanks those who have supported the campaign so far but cautions that ‘there’s still a long way to go’ before the phone can go from prototype to reality.

You can see the short piece to camera in the video below.

For those that need it, here’s a transcript of what Silber had to say:

I wanna thank you all for the amazing support you’ve shown the Ubuntu Edge campaign already. From the moment it went live yesterday the response has been overwhelming.

We hit around 2 million in funding at around the 8 hour mark – which I understand is a record in the crowdfunding history.

We’re now a little over 10% on the way to our goal which is terrific and we’re really excited about that. But there’s still a long way to go.

We really appreciate all the support you’ve shown, whether you’re pledging to receive an Ubuntu phone yourself or even if you’re just talking about it on Twitter and sharing your excitement on Facebook, on your blogs, with your friends. Every little bit helps to spread awareness and help make this a reality. And we really want to make it real.

We’re as excited in Canonical about this as you are out there.

So continue to show us your support and help us make this – a very tempting prototype – into a reality.

Want to back Ubuntu Edge? Hit the button below to pledge whatever you can… 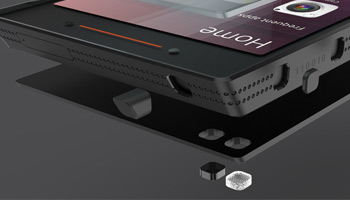