Jolicloud are offering users of Ubuntu a new, web-orientated experience for their desktop.

The ‘Jolicloud Desktop Environment’ puts a HTML5 launcher with shortcuts to popular websites and services front and center, in place of the traditional desktop.

Social and cloud storage accounts can be connected to it, making managing your online files and keeping tabs on your social networks easier.

The interface is the same as that used by the French company’s Ubuntu 10.04-based ‘JoliOS’ and their recently launched online ‘JoliDrive’ hub.

There’s a good chance that some folks were scared off when I described the ‘joliDE’ as ‘web-orientated’. Whilst that isn’t a lie – the web is an intrinsic part of the Jolicloud/Jolidrive experience, it’s also capable of managing local files and apps in addition to those online.

For example, click the ‘Hard Drive’ entry in the sidebar and you can browse through your files and folders. Clicking on certain file formats (mainly images and video) will show a preview in the left-hand pane, along with options to open the file or open the folder it resides in with a more traditional file-manager like Nautilus.

Dropbox, SkyDrive, Google Drive, or Ubuntu One accounts can be integrated into the file manager, letting you browse, preview, share and download files without needing to open another app.

In theory JoliDE also lets you playback MP3’s stored in your online accounts. In reality, a known issue in the version of Chromium that JoliDE uses means that this doesn’t always work -a great shame as the music player is pretty darn swish!

Much like Google Chrome OS Jolicloud puts web apps – applications which run inside a web-browser – front and center. A curated app-store offers over 1,500 web apps, all of which are a single click away – no password prompts, no installers.

Admittedly the vast majority of these are ‘glorified bookmarks’ that simply open the respective web-site or service in a new window. But it all feels seamless enough to not matter.

Some web services, e.g. Dropbox, Google+ & Soundcloud, can be connected directly to Jolicloud. Doing this gives you access to custom views – like this carded version of Google+.

Local applications can also be installed and used as in Unity, GNOME Shell or KDE; using JoliDE doesn’t mean you lose access to ‘native’ necessities like Skype, Rhythmbox or Thunderbird.

Find your existing apps stored in the ‘Local Apps‘ folder on the Launcher homescreen.

Window management in Jolicloud is a little different to that in Ubuntu.

Firstly, all applications open maximised. And while applications can be ‘un-maximised’ after launch, some seem to lose their window controls

But there’s beauty in simplicity. Switching between open applications/windows is a cinch – just hit the correct app icon. To close a window just click its respective icon in the panel so that it gets focus, then hit the ‘x’ to the far right of the title bar in the top panel.

To get back to the main launcher just tap the blue ‘cloud’ icon at the far left.

From the main launcher screen hit the stack of horizontal lines to toggle the sidebar.

But it’s not all fantastic:

JolieDE, currently in beta, is available to install on Ubuntu 12.04 and 12.10. It doesn’t replace or remove Unity, instead it runs as a separate session selected from the Unity login screen.

To install it you first need to add the Jolicloud Team PPA. This is best done by pasting the following command into the Terminal application:

After running the above, and putting in your user password when prompted, you can hit the button below to install it.

Once installed proceed to log out. Click the session-selector icon (the little ubuntu icon in the upper-right of the login box) in the Unity Greeter and, from the menu that appears, choose ‘Jolicloud’ then ‘Ok’. 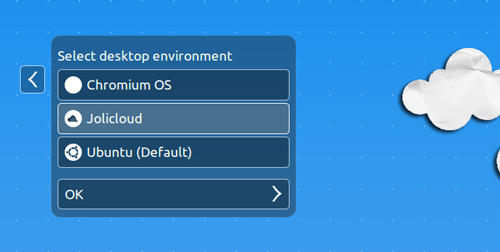 Login as normal and the Jolicloud desktop will load.

Next time you reboot Jolicloud will still be selected as the default session. Why? Not because it’s a tentacled monster taking over your system, rather the Unity Greeter uses the last selected session as the ‘default’. To stop logging in to Jolicloud you need to go back to the session selector and choose Ubuntu, GNOME, XFCE, or other, click ‘OK’, and then log in. 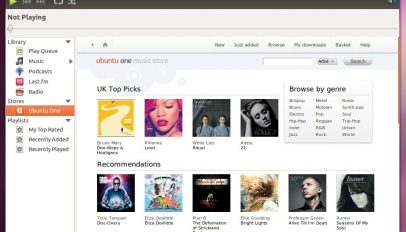