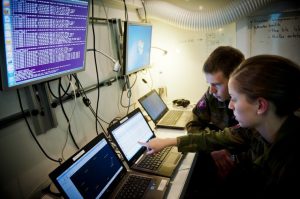 The Norwegian military use Ubuntu – and that’s a fact.

In an article on Norway’s cyber defence effort over on Norwegian IT site digi.no, Ubuntu’s Unity desktop is clearly visible in one of the accompanying photos.

So much for people not using it!

Open-source software is already used by military and security organisations because of its malleability. Unlike proprietary software, freely available code and platforms can be honed, developed on and analysed to fit a given purpose.

And those reasons become even more compelling for those tasked with combating (or, indeed, engaging in) cyber warfare.